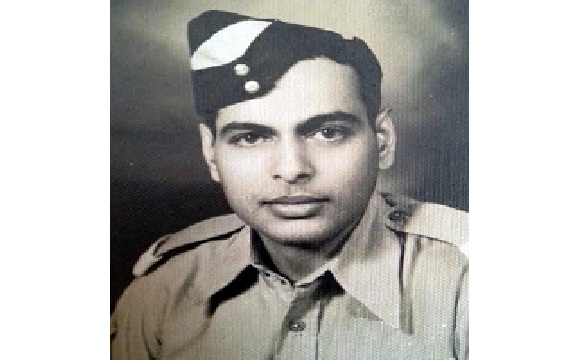 Fg Offr Umesh Sunder Thonse hailed from Maharashtra and was born on 28 May 1915. He was commissioned into the Royal  Indian Air Force on 27 Sep 1942 at the age of 27 years. He joined the flying stream of the Royal Indian Force and got trained as a Navigator as part of the 10 OBS Course.  He was promoted to the rank of Fg Offr on 27 Sep 1943. Thereafter he served with 7 Sqn from Dec 1943 to Apr 1946 and then with 10 Sqn from  Apr 1946 to Jul 1946.  Subsequently he served with Navigation and Signals School at Tambaram.  When he had put in about 5 years of service, he got involved in active operations, as the war with Pakistan broke out in October 1947.

During 1947, Fg Offr Umesh Sunder Thonse was serving with 12 Sqn based at Air Force Station Agra. 12 Sqn was formed in 1945 on the spitfires with Squadron Leader Syed Naseem Haider as its first Commanding Officer. Later it became the first Indian squadron to convert to Transports. It moved to Agra in August 1947 and operated Oxfords and Dakotas. When Kashmir was invaded by Pakistan in 1947, the Indian Air Force launched various air operations in support of Indian Army.  12 Sqn from Agra under the command of Wing Commander Karori Lal Bhatia undertook many transport support operations in moving soldiers and equipment. Fg Offr Umesh Sunder Thonse was tasked for one such operation on 31 Oct 1947.

On 31 Oct 1947, Fg Offr Umesh Sunder Thonse as a Navigator took off in his aircraft Dakota C-17 (MA-965) from Jammu as per the operational plan along with Flt Lt Clifford Joseph Mendoza as the pilot and Fg Offr TR Peters as co-pilot. The other aircrew members included Warrant Officer Patric Hart, LAC Madan Prakash, Sgt Om Prakash Kacker, LAC Bal Krishna Bakshi and LAC R Singh. However after flying for some time the aircraft presumably developed some serious snag and crashed in the mountainous area of Pir Panjal Mountain range between Jammu and Srinagar. As the aircraft lost contact a massive search and rescue operation was launched but it did not yield any result. The search operation was called off after few days. However the wreckage of the aircraft was found in an isolated area in the year 1980. Besides Fg Offr Umesh Sunder Thonse, Flt Lt CJ Mendoza and  Fg Offr TR Peters, the other air warriors who lost their lives in this mission included WO Patric Hart, LAC Madan Prakash, Sgt Om Prakash Kacker, LAC Bal Krishna Bakshi, LAC R Singh, Flt Sgt HK Singh, Sgt John Stephen, Cpl IS Jesudasan, Cpl Huligole A Srinivas, LAC KS Gandarde, LAC Srinivasan, LAC JMR John, LAC S Singh, LAC M Singh, LAC Mohan Singh, LAC Suresh Jha, LAC R Singh, LAC NG Chowdhury, Cpl Kartar Singh, LAC Jai Pal Singh, LAC Namburi Narayan, LAC Om Prakash Sharma.  A joint funeral was conducted in honour of the 25 IAF personnel on June 11, 1981. Fg Offr Umesh Sunder Thonse was a competent navigator and committed air warrior, who laid down his life at the age of 32  years in the line of his duty.