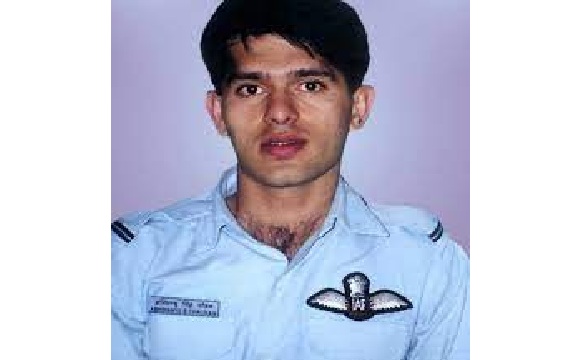 Flying Officer Abhimanyu Singh Chauhan hailed from Bhankrota village of Jaipur district in Rajasthan and was born on 14th July 1978. Son of Shri Dharam Veer Singh and Smt Madhuri Singh, he had a younger brother Siddharth Singh as his sibling. Fg Offr Abhimanyu Singh studied from St. Xavier School in Jaipur and passed out in the year 1995. He had a strong desire to join the armed forces right from his childhood, which grew along with his age. Following his passion, he got selected for the prestigious NDA in July 1997, while he was studying at Maharaja College, Jaipur.

He passed out of the NDA in the year 2000 and went to Air Force Academy in Dindigul near Hyderabad for further training. After completing multiple phase flying training he was commissioned as a Flying Officer on 16 June 2001 as part of 167th Pilots' Course. After completing his flying training, Fg Offr Abhimanyu Singh got posted to 8 Sqn,  a frontline fighter Squadron flying MiG-21 aircraft.

During 2002, Fg Offr Abhimanyu Singh Chauhan was serving with the No. 8 Squadron based at Air Force Station Bagdogra in West Bengal with Wg Cdr Naresh Dogra as its Commanding Officer. The squadron had a long operational history stretching back to the Burma Campaign of World War II. No.8 Squadron was formed on 1 December 1942 from No.5 Coast Defence Flight with Squadron Leader Niranjan Prasad as its first Commanding Officer. For the next two months it was attached to No.6 Squadron, before in April 1943 it received the Vultee Vengeance and began to train as a dive-bomber squadron at No.152 OTU. The Vengeance was not a very effective dive bomber, and the squadron didn't enter combat until December 1943. From then until July 1944, it carried out ground-attack missions in support of the Fourteenth Army in Burma. In July the squadron was withdrawn to convert to the Spitfire, returning to the front as a fighter squadron in January 1945.

In October 1946 the squadron began conversion to the Hawker Tempest. During Mar 1948, 8 Sqn was operating from Air Force base at Pune with Squadron Leader Manohar Maharudrappa Sakhare as its Commanding Officer. It was moved to the western border in Mar 1948 to support Army operations in J&K. In the year 1989, the squadron moved to Air Force Station Bagdogra in West Bengal. During peacetime training is one of the most important activities of IAF which helps it to remain prepared to take on any eventuality. A war-like situation is created in the air for the pilots to practice and remain updated. Fg Offr Abhimanyu Singh too was undertaking training sorties to practice complex air operations and gain the required expertise. On 14 Nov 2002, Fg Offr Abhimanyu Singh was tasked for another such sortie along with his Commanding Officer, Wg Cdr Naresh Dogra as the captain of the aircraft.

It was a training sortie for an air combat mission in a MIG-21 trainer aircraft. As planned Fg Offr Abhimanyu Singh and Wg Cdr Naresh Dogra took off from Bagdogra airbase after completing the necessary operational checks on ground. The mission involved rehearsing of war plan in one of the valleys flying at ultra-low level on the International Indo-China Border.  After flying for about 20 minutes, when the aircraft was undertaking a low level manoevre, it apparently hit high tension wire. As a result, the plane caught fire and crashed at around 0715 hrs in the morning. It broke into pieces over an uninhabited area of a tea estate, about 12 km from the airbase in Darjeeling district. Both pilots Wg Cdr Naresh Dogra and Fg Offr Abhimanyu Singh could not survive in the crash and were martyred. Fg Offr Abhimanyu Singh was was a valiant soldier and committed air warrior, who laid down his life at the age of 24 years in the line of his duty.