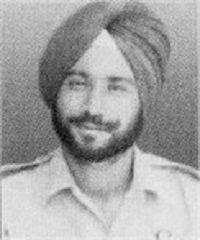 Flying Officer Man Mohan Singh after his military training in NDA was commissioned into the Indian Air Force on 04 June 1967. He then went to undergo the flying training as he was selected to be trained as a fighter pilot in the IAF. After completing his initial pilot training Fg Offr Man Mohan was posted to various Air Force bases and gained experience in flying different types of aircraft. By 1971, Fg Offr Man Mohan had already completed 04 years of service in the Air Force and  evolved into a professionally competent pilot having expertise in various types of air operations. During 1971, he was serving with  9 Sqn operating Gnat fighter aircraft.

When the war with Pakistan broke out on 03 Dec 1971, IAF launched numerous counter air operations against enemy targets commencing 04 Dec 1971. Besides undertaking deep penetrations strikes inside enemy territory , IAF also launched various air support operations in support of our ground forces. The air support operations invariably were attacks against enemy tanks, artillery positions and other ground based weapons and systems in support of our ground forces.

On 07 Dec 1971, Fg Offr Man Mohan was tasked to ferry Gnat aircraft from Amritsar to Air Force base at Halwara owing to an operational requirement. Fg Offr Man Mohan’s Sqn was based at Halwara base but its aircraft were operating form other forward air bases during 1971 war to take part in air operations closer to the border with Pakistan.

Fg Offr Man Mohan took off from Amritsar as per the operational plan and had almost reached his destination when he experienced some technical glitches. His Gnat aircraft went out of control and crashed near Air Force base at Halwara. Fg Offr Man Mohan could not survive the crash and was martyred. Fg Offr Man Mohan was a competent pilot and a committed soldier who laid down his life in the line of his duty .