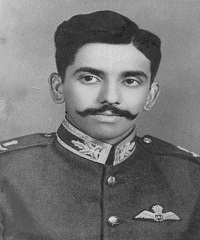 Fg Offr KP Muralidharan was serving with No. 20 Squadron, the “Fast and Fearless” Squadron of IAF, then located at Pathankot, a Hunter Squadron marked out for air support and offensive operations during the 1971 war.

Soon after PAF’s strike, the IAFs counter strike was mounted and on 04 Dec 71 at about 1100 hours, alongwith other pilots, Fg Offr Muralidharan was assigned with a mission to launch a hunter attack with A-462 Hunter Fighter against PAF airfields at Peshwar. He amazingly  ran into Pakistan air opposition and undertook his mission however he was intercepted by PAF’s F-86 Sabres., and then instead of evading the attacking Sabres got involved in a dog-fight.  In the ensuing fight he was last seen flying north of Peshwar in combat with a PAF Sabre, by his colleague in the air with another mission. Subsequently it was learnt that he was shot down by enemy sabre with no chance of ejecting out of the aircraft. This was later substantiated in the 1971 War Experiences narrated by a retired PAF pilot who has claimed to be the opponent then. Flt Lt Muralidharan, while flying deep into enemy territory, displayed gallantry, conspicuous bravery and exceptional devotion to duty in the highest order. His valour and commitment have been praised even by enemy pilots who managed to escape from his path.

He was declared missing and only after all hopes of getting him back failed the decision to declare him dead  was taken in late eighties. He was finally declared Killed (presumed) in Action (KIA) on 04 Dec 1971