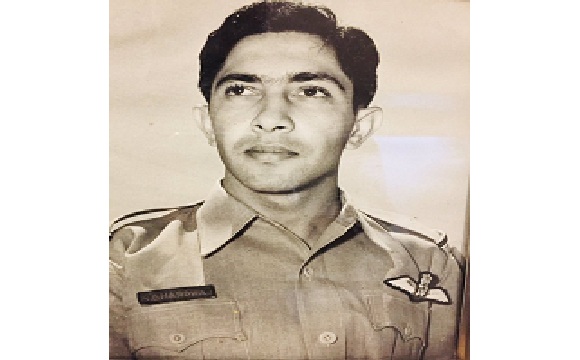 Flight Lieutenant Satish Bharadwaj hailed from Delhi and was born in the year 1940.  He studied from Modern School Barakhamba in New Delhi.  He was very quite passionate about joining the Air Force and worked at realizing his dream. Eventually, he got selected for the prestigious NDA and joined the 18th NDA Course.  After excelling in varous aspects of training, he passed out of the NDA on 01 June 1960.  He was commissioned into the Indian Air Force on 19 Dec 1961 at the age of 21 years. He was commissioned in the flying stream of the IAF and got trained as a fighter pilot as part of 80th Pilots' Course.

After completing his flying training, he served with various flying squadrons located at different Air Force bases. By 1965, Flt Lt Satish Bharadwaj had put in about 4 years of service and evolved into a professionally competent fighter pilot having expertise in various air operations.

In 1965, Flt Lt Bharadwaj was serving with 45 Squadron which was operating Vampire fighter bomber aircraft. The 45 Squadron of the IAF was formed on 15 Feb 1960 with the British built De Havilland Vampire with Squadron Leader Mirgind Singh Grewal as its first Commanding Officer. The Squadron was christened as "Flying Daggers' with its motto being 'Ajeetakshay". Very early in his service career Flt Lt Bharadwaj got an opportunity to take part in active operations as the war broke out with Pakistan in 1965. As the war clouds gathered on the horizon, 45 Sqn with Squadron Leader Sudesh Kumar Dhar as its Commanding Officer was tasked to move from Pune to Pathankot.

Pakistan launched a full scale attack on 01 Sep 1965 in the Akhnoor area. Accompanied by heavy artillery fire at around 0330 hrs, 70 Pakistani tanks along with two infantry Brigades raced across the Akhnoor bridge with an intention to cut the Indian Army's  lifeline to the towns of Rajauri, Jhangar, Naushera and Poonch. 191 Inf Bde in charge of the area immediately asked for air support to thwart the enemy designs. In response to this, the Vampires of 45 Sqn were tasked to carry out offensive missions against the enemy targets with the first mission scheduled for 1719 hrs, second at 1730 hrs and third at 1740 hrs. Flt Lt Bharadwaj was detailed to go for the second mission along with Sqn Ldr AK Bhagwagar, Flt Lt VM Joshi and Flt Lt WS Sondhi.

As the second mission with Flt Lt Bharadwaj and three other pilots went in to attack the enemy armour, they were taken on by enemy Sabre jets of No 5 and No 15 PAF Sqns. The sidewinder missile armed PAF Sabres were technologically superior to Vampire aircraft but Flt Lt Bharadwaj and his comrades continued to engage them, displaying courage and professional skill of a very high order. However eventually in the fierce air combat three Vampires were lost which included that of Sqn Ldr AK Bhagwagar, Flt Lt S Bhardwaj and Flt Lt VM Joshi. Flt Lt Satish Bhardwaj was a gallant and committed air warrior, who laid down his life at the age of 25 years in the service of the nation.