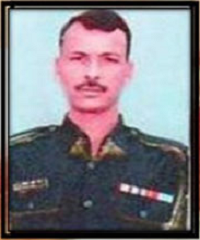 Dafadar Aslam Khan hailed from Ranasar village in Churu district of Rajasthan and was born in the year 1979. Son of Late Shri Hasam Khan, he was the youngest of nine siblings. After completing his initial education, he joined the Army in 1999 at the age of 19 years.  He was recruited into the 3 Armd Regt of the Armoured Corps, one of the crucial combat arms of Indian Army.

After serving for few years, he got married to Ms Sanju and the couple had three daughters and a son. By the year 2017, he had put in around 18 years of service and had been promoted to the rank of Dafadar (Equivalent to Hav). In the same year he was deputed to serve with 24 RR battalion deployed in J&K for counter-insurgency operations.

During Sep 2019, Dfr Aslam Khan’s unit 24 RR, was deployed in Ganderbal district district in J&K and was engaged in operations against the militants on a regular basis. In the early part of Sep 2019, the security forces received credible information from the intelligence sources about the presence of terrorists in Dadarwal, 40 km from Amarnath. Based on the assessment of the available information the security forces decided to launch an operation to nab them. Dfr Aslam Khan was made part of the team of 24 RR that was assigned the task of undertaking this operation.

On 07 Sep 2019, Dfr Aslam Khan and his comrades reached the suspected area and cordoned off the area as planned. As the operation was underway, the militants felt cornered and started firing indiscriminately. A fierce gun battle ensued thereafter during which three dreaded militants were gunned down. However during the heavy exchange of fire Dfr Aslam Khan got severely injured. He later succumbed to his injuries and was martyred. Dfr Aslam Khan was a courageous and dedicated soldier who laid down his life in the line of his duty.

Dafadar Aslam Khan is survived by his wife Smt Sanju Khan, three daughters and a son.