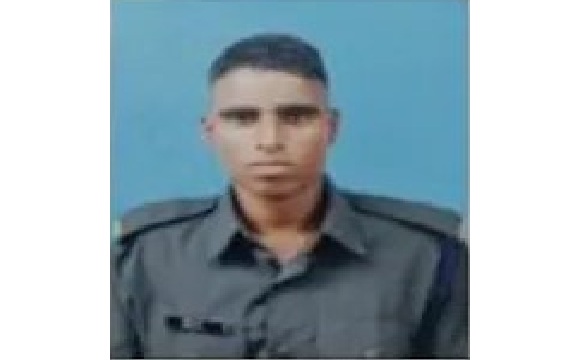 Craftsman Aswin KV hailed from Kizhakkemuri, a small village on the banks of Thejaswini river, in Cheruvathur panchayat of Kasaragod district in Kerala. Son of Shri MK Ashokan and Smt KV Kaushalya, he had two sisters Ashwathy and  Anaswara as his siblings. Born in a poor family, Craftsman Aswin studied using kerosene lamps, but scored well in the Class 10 exam. Continuing his perseverance, he got the top A+ grade in nine of 10 subjects in his class XII. After his schooling at Government Fisheries Vocational Higher Secondary School at Cheruvathur, he took up BSc Physics at Kasaragod Government College. But in the meantime he got selected to join the army.

He was recruited into the Corps of Electronics and Mechanical Engineers (EME), a branch of the Indian Army, responsible for design, development, trial, inspection and refit of weapon systems and equipment. He further got trained as a technician in the Army Aviation Corps, the air arm of the Indian Army. He functioned as part of the air crew and soon gained experience in various Helicopter operations.

During 2022, Cfn Aswin was serving with the 252 Army Aviation Squadron deployed in the North-East. The squadron was operating Advanced Light Helicopter (ALH), which was known to be a high-performance helicopter designed for operation over a very wide range of weight, center of gravity and altitude conditions. Out of the four variants—(ALH Mark 1, Mark 2, Mark 3 and ALH-WSI) available in the Army, 252 Army Aviation Squadron was operating ALH-WSI (Weapons Systems Integrated) versions having powerful engine, called Shakti, co-developed by Hindustan Aeronautics Limited (HAL) and Safran of France.  The Advanced Light Helicopter (ALH-WSI) was versatile, multi-role, multi-purpose, highly maneuverable, and rugged in construction.  On 21st Oct 2022, Cfn Aswin with Major Vikas Bhambhu and Major Mustafa Bohara as pilots and 2 other crew members was tasked for an air mission.

Both the pilots had more than 600 combined flying hours on the Advance Light Helicopter (Weapon Systems Integrated) and over 1800 service flying hours between them. Major Vikas Bhambhu and Major Mustafa Bohara were experienced pilots with substantial flying experience but they apparently did not get adequate time to bring the aircraft under control. Consequently, the aircraft crashed at around 10:43 am and Cfn Aswin and other crew members could not survive the crash. A joint search operation with teams from the army and air force was launched immediately after locating the crash site, which was very remote and extremely challenging in terms of hills with steep gradients and thick jungle. The search and rescue team eventually managed to retrieve the mortal remains of the valiant soldiers. Besides Cfn Aswin, the other martyred soldiers included Major Mustafa Bohara, Major Vikas Bhambhu, Hav Biresh Sinha and  Naik Rohitashva Kumar. Cfn Aswin was a valiant soldier, who at the age of 24 years laid down his life in the service of the nation.