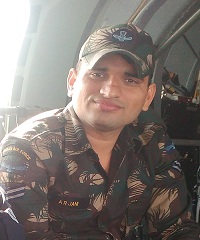 Achalaram Jani was born on 15th June 1989 in Osian Jodhpur, Rajasthan. After completing his education he joined Indian air force in the year 2010. His parents were Nayuram and Tejadevi. Last place he served in IAF was Lucknow from where he was posted to Bangalore. He was to join his duty on 24th of July at Bangalore and therefore before proceeding to his next assignment he visited his native village to spend the days with his family members and take the blessings from his parents.

While AchalaRam Jani was enjoying his journey leave with his family members, on July 2nd morning while extracting water from the tank which was located near his house, unfortunately he slipped and fell into the tank. After a long time people around there saw him struggling inside the water and took him to the hospital. The doctors present there tried their best to save him however the life of Cpl Jani could not be saved.

After hearing the news about Jani a big crowd formed in front of hospital where his body was taken for the postmortem. His  funeral was  attended by large number of people. There were many renowned people of the area like president of Indian Farmer’s Association Mr.Ram Narayan, President of business Administration Mr.  Jagadish Chandra Jani, apart from police officials were also present on the occasion. Three Air force personnel were also present at the cremation ground to pay their tribute to their colleague and the worthy son of the soil.

Achalaram Jani is survived by his parents, wife, sister and a younger brother.