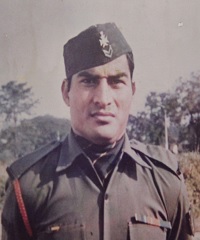 Havaldar Dhyan Singh Negi was born on 12th Sep 1956 in Gadigaon Talla village of Pauri Garhwal district in Uttarakhand. Son of Shri Dulup Singh Negi and Smt Chakori Devi, he completed his school education from his native village. Like many of the young people in his village, he too nursed the idea of donning the military uniform since his school days. Eventually he joined the Army in 1976 at the age of 20 years. He was recruited into 10 Garh Rif battalion of the Garhwal Rifles Regiment, an infantry Regiment well known for its fearless soldiers.

After completion of his basic Army training at Garhwal Rifles Regimental centre at Lansdowne, he served in various operational areas facing many challenging situations. By the year 1996, he had put in about 20 years of service and had been promoted to the rank of Havaldar. After serving with his parent unit, he was later deputed to serve with 3rd battalion of the Rashtriya Rifles in 1995.

During Mar 1996,  Hav Dhyan Singh was serving with 3 RR battalion deployed in Anantnag district of J&K close to the Line of Control(LOC). The unit troops were engaged in counter-insurgency operations on a regular basis as its AOR (Area of Operation) was affected by active militancy. On 12 Mar 1996, the security forces received credible information from the intelligence sources about the presence of terrorists in Ashapur village of Anantnag district. Based on the intelligence inputs Hav Dhyan Singh‘s unit decided to launch a search and destroy operation in the suspected area. Hav Dhyan Singh was made part of the team that was assigned the task of undertaking the operation.

On 12 Mar 1996, as planned the assault team including Hav Dhyan Singh led by Maj Santanu Nag reached Ashapur village of Anantnag district. After reaching the suspected area the troops cordoned it off. As the search and cordon operation was underway, Hav Dhyan Singh and his comrades were fired open from the militants hiding in the house. This sudden and abrupt fire injured Hav Dhyan Singh and another soldier instantly. Accessing the situation, Maj Santanu Nag ordered his men to evacuate the casualties immediately. While trying to evacuate the two casualties, Maj Santanu Nag himself received gunshot and got injured.  However to prevent the militants from escaping, Maj Santanu despite being injured rushed into the house.

Seeing his Company Commander charging into the room alone, Hav Dhyan Singh despite being severely injured rushed behind him. One of the terrorists seeing Maj Santanu rushing inside fired at him. However Hav Dhyan Singh immediately swung into action to shield his Company Commander and took the burst of fire. The bullet pierced through his spine and he immediately fell down. Maj Santanu having exhausted his ammunition, dropped his riffle and grappled with the terrorists barehanded. While doing so he was hit by another bullet injuring his severely. He too succumbed to his injuries and was martyred. Hav Dhyan Singh was a valiant soldier who displayed indomitable courage beyond the call of his duty in saving the lives of his comrades while sacrificing his own life in the finest traditions of the Indian Army.

Hav Dhyan Singh Negi was was given the gallantry award, "Shaurya Chakra" for his commendable courage, camaraderie, devotion to duty and supreme sacrifice.