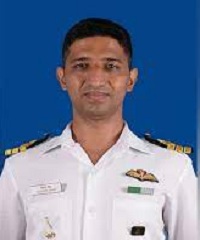 Commander Nishant Singh was born in a Naval familiy and grew up in various Indian Navy bases. Son of  a Naval veteran Cdr Yash Vir Singh, Cdr Nishant aspired to follow in the footsteps of his father since his younger days. He studied from Navy Children Schools at Goa and Vishakhapatnam, where the foundation of his future Naval career was laid. His dream came true when he got commissioned into the Executive branch of Indian Navy on 01 July 2008 at the age of 22 years.

Subsequently he joined Naval Aviation and got trained as a fighter pilot. He soon developed into an ace pilot and became a a qualified flying instructor adept on Kiran, Hawk and Mig-29K aircraft. He also had the distinction of earning the 'Wings of Gold' after advance strike training with the US Navy, in December 2011. By the year 2020, he had been promoted to the rank of Commander and had served in various Naval bases in over 12 yeas of service. Besides being one of its most accomplished aviators, Cdr Nishant was also a qualified mountaineer as well as a skilled yachtsman. In May 2020, while seeking permission from his Commanding Officer to get married to Ms Nayaab Randhawa, Cdr Nishant's humour-laden letter titled “Permission to bite the bullet” had caught the imagination of many in social media.

During Nov 2020, Cdr Nishant was serving with at INS Hansa the Naval base at Goa. He was serving with the Indian Navy’s famed “Black Panther” squadron flying MiG-29K aircraft operating from the aircraft carrier, INS Vikramaditya. The Naval fighter pilots like Cdr Nishant manage the additional complexity of landing their machines on a moving aircraft carrier deck by snagging the “tailhook” to arresting high-tensile wires, after having approached the deck at exactly the right angle. All strategizing and coordination has to happen in a matter of seconds and demands a very high order of flying skills. Being an accomplished flying instructor, Cdr Nishant would often fly with young pilots in a trainer aircraft to give them experience on various air operations.

Cdr Nishant was flying one such mission on 26 Nov 2020 in a two seater MiG-29K along with a young pilot. The sortie was uneventful and smooth but developed technical snag on its return journey. The aircraft became uncontrollable and eventually crashed. The Indian Navy launched massive search operations, deploying nine warships, 14 aircraft and fast interceptor craft. The young pilot was rescued but Cdr Nishant could not be saved and his body was recovered 11 days after the mishap. Cdr Nishant Singh was a gallant soldier and committed Naval fighter pilot who laid down his life in the line of his duty. 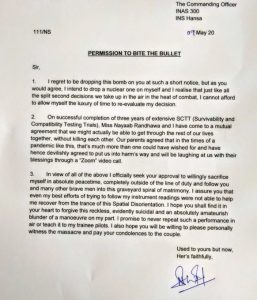