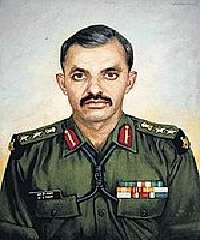 Colonel N Jayachandran Nair was born on February 17, 1951, in Ernakulam, Kerala. Popularly known as “NJ”, Col N Jayachandran Nair is one of the most decorated officers in the Indian Army.  Col Nair studied in the Sainik School, Kazhakootam, Kerala and later joined the National Defence Academy, Pune (38th NDA course and belonged to ‘I’ Squadron). He got commissioned into 16 Maratha Light Infantry on 18 June 1971.

During his service career, Col Nair served in various operational areas with different terrain and working environment. He also served as an instructor at the Army Intelligence school in Pune. He was also an alumnus of the Defence Services Staff College (DSSC) in Wellington and had a tenure in Bhutan. His career in the Indian Army spanned over two decades, during which he had held varied command and as well as staff appointments.

During 1983, Col Nair’s unit was deployed in Mizoram area engaged in anti-insurgency operations. On 13 Feb 1983, Col Nair’s unit was tasked to launch an operation to flush out insurgents suspected to be in their hideout. Col Nair himself led the operation and engaged the insurgents in close quarter combat. The operation was successful and he was awarded the nation’s second highest peacetime gallantry award, “Kirti Chakra” for displaying exceptional gallantry and leadership in the face of the enemy.

During 1993, Col Nair’s unit was deployed in Nagaland, infested with insurgents engaged in anti-national activities. On Dec 20, 1993, Colonel N Jayachandran Nair was leading an advance party of the convoy in Nagaland when they were ambushed by about one hundred insurgents. The insurgents in a pre-planned attack used automatic weapons and managed to kill 1 Junior Commissioned officer and 13 jawans on the spot. Col Nair too got injured in the attack but did not lose courage and took charge of the situation.

Col Nair though seriously injured, crawled to the other side of the road on his knees to get into a tactically advantageous position. Like a hero, he carried an injured soldier on his shoulders and directed his troops to fire at the rebels. This resulted in the halt of cross firing from the rebels which gave Col Nair crucial time to tactically position his troops for the assault. Col Nair despite being wounded badly kept on motivating his troops and finally forced the rebels to retreat. Col Nair subsequently succumbed to his injuries and was martyred. Col Nair as a commanding officer of his unit acted as a true military leader and saved the lives of his men by his daredevil action and unyielding fighting spirit.

On 20th of December, 1993, Col Nair was leading the advance party of the convoy moving towards Mon on the Mokotchung-Mariani Road in Nagaland. At 8.40 am when Col Nair and his men were negotiating a series of road bends, they were ambushed by about one hundred armed insurgents from well-prepared positions. The overwhelming fire from sophisticated and automatic weapons killed 1 Junior Commissioned Officer and 13 Jawans on the spot. Col Nair, who was also seriously injured, did not lose courage nor was he unnerved.

Col Nair crawled to the other side of the road balanced himself against the slope of the raised ground, orders a Lance Naik to mount on his shoulders and throw two hand grenades on the firing position of the insurgents. Consequently, their firing stopped. Making use of this brief pause, Col Nair organized his jawans in an assault line. With indomitable courage and grim determination, he charged at the insurgents killing one of them. Despite his serious personal injuries, throughout the charge, Col Nair led from the front, exhorting and inspiring his men. Faced with such extraordinary courage, the insurgents broke ranks and fled. Under extremely difficult circumstances while grappling with the insurgents and eventually putting them to flight, Col Nair was constantly a source of inspiration to the men under his command. In this action, Col Nair bore the brunt of automatic fire of the insurgents and attained martyrdom. His body was found 300 meters away from the site of an ambush near the firing position of the insurgents.

Thus Col Neelakantan Jayachandran Nair, Kirit Chakra, in the best tradition of the Indian Army, displayed courage and gallantry of the highest order, much above and beyond the call of duty.

In 1983 in Mizoram, Col Nair had gone through a similar experience of engaging the insurgents in a close quarter combat and had killed one of them, notwithstanding serious bullet injuries in both his thighs. Col Nair had then been decorated with Kirti Chakra in recognition of his exceptional gallantry.