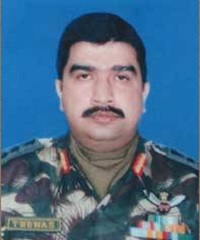 Colonel Jojan Thomas was born on  22 Jul 1965 in Kuttoor village of Thiruvalla District of Kerala. He was commissioned from the Officers Training Academy, Chennai in March 1986. Son of an army veteran Captain P.A Thomas  and Aleyamma Thomas, Col Thomas was eldest among his four siblings. He came from a family with deep military roots with his two brothers also serving in the Armed Forces.

Col Jojan Thomas  originally belonged to 11 Jat of the famed Jat Regiment , but was sent on deputation to 45 Rashtriya Rifles in 2008 to undertake anti terrorist operations. Before moving to 45 RR he had already 20 years of experience of serving in various operational areas. He was also a trained pilot and had served with Army Aviation corps for six years. Col Thomas was a brave and committed soldier and a military leader par excellence.

On 22 Aug 2008, at around 0330 hours, Col Thomas received information about the presence of terrorists in the dense forests of Machhal, in Kupwara district of J & K. A decision was taken to launch an operation to nab or eliminate the terrorists at the earliest. Having realized the importance of the operation , Col Thomas decided to lead that operation himself along with the troops from his unit.

The team soon spotted the terrorists and a fierce gun-battle ensued there after. During the operation Col Thomas eliminated two terrorists from close quarters. However, in the process Col Thomas sustained severe gunshot wounds, but with utter disregard to his personal safety, he engaged a third terrorist in a fierce hand-to-hand fight and eliminated him. During the entire operation, the team led by Col Thomas shot down six militants. Col Thomas later succumbed to his injuries and made the supreme sacrifice in service of the nation. Col Jojan Thomas was given the nation’s highest peace time gallantry award, “Ashok Chakra” for his outstanding courage, unfaltering leadership and supreme sacrifice.

On 22nd August 2008, at about 3.30 am, Colonel Jojan Thomas, Commanding Officer of 45 Rashtriya Rifles Battalion deployed in Jammu and Kashmir established contact with a group of terrorists. Colonel Thomas immediately rushed to the area with available troops and soon a fierce firefight ensued. Leading from the front, Colonel Thomas eliminated two terrorists from close quarters. In the process he sustained severe gun shot wounds. In spite of this, he engaged the third terrorist in a fierce hand-to-hand fight before eliminating him. Colonel Jojan Thomas displayed exemplary leadership and exceptional gallantry in eliminating three hardcore terrorists and made the supreme sacrifice for the nation.

For his exemplary leadership, unparalleled courage beyond the call of duty and supreme sacrifice in the highest traditions of the Indian Army, Col Jojan Thomas, is awarded India’s highest Gallantry Award in peace time the “Ashok Chakra”.

Mrs Beena Thomas, wife of Colonel Jojan Thomas AC paid tribute to her husband on his “Day of Martyrdom” on 22 Aug 2019…..

An Indian army soldier’s courage reminds me of the saying by the famous English writer Gilbert Keith Chesterton, ” Courage is almost a contradiction in terms. It means a strong desire to live taking a form of a readiness to die”. My husband was no different and was an epitome of courage and devotion to duty. Earlier, I could not have imagined staying even 11 days away from him but now 11 years have gone by since his martyrdom on 22 August 2008. Every moment in these years has been difficult but somehow I have felt his presence around whenever it was required. His invisible presence has comforted me whenever I have felt low and needed support to lean on.

It is said that time heals all wounds but I don’t think the time has succeeded in doing so in my case. Time has not stopped since 22 Aug 2008 and nor have my pain which regularly got accentuated on various occasions like our daughter’s wedding, son’s graduation, the birth of our granddaughter, Manoah and many such significant family events.

My husband laid down his life in the line of duty while leading an operation as the Commanding Officer of his battalion. Son of an army officer, he was a deep-rooted soldier at heart but he ruled the hearts of our family too. To commemorate his 11th “Day of Martyrdom”, we are organizing a medical camp at his village. We conduct such activities and follow a life-path that resonates with the values he cherished. Though I have missed his love and care all these years, I take immense pride in being Col Jojan Thomas’s wife- a valiant soldier and the recipient of the nation’s highest peacetime gallantry award.

As the quote of Benjamin Disraeli says, “The legacy of heroes is the memory of a great name and the inheritance of a great example”, I will continue to follow his great example and live life like a true soldier’s wife.