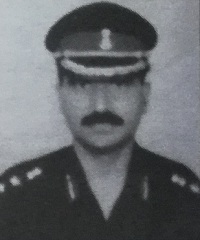 Col Jai Prakash Janu hailed from Mohanpur village in Jhunjhunu district of Rajasthan and was born on 22nd Jan 1955. Son of Shri Khayali Ram and Smt Kishori Devi, Col Jai Prakash had seven other siblings. Col Jai Prakash as a young boy was brilliant in academics and got admission to Sainik School Chittorgarh in 1966. At this school, the foundation of his future army career was laid, and eventually, he got selected to join the prestigious NDA in the year 1973. He got commissioned as a second lieutenant on 15 Dec 1976 at the age of 21 years.

He was commissioned into the Bihar Regiment, an infantry Regiment well known for its dauntless soldiers and numerous battle exploits. As his first assignment, he got posted to Leh in Ladakh and served there for a couple of years. He got promoted to the rank of Captain in 1980 and then in 1981 got posted to Infantry School Belgaum as commando instructor. He then went on to serve in Sikkim and J&K before getting selected to undergo the Staff Course at the prestigious Defence Services Staff College(DSSC) at Wellington in Tamilnadu. He then served in Punjab and Siachen Glacier and also took part in “Op Rhino” in the year 1996. By the year 2001, he had been promoted to the rank of Colonel and had been appointed as Commanding Officer of 120 Infantry Battalion (TA).

During Mar 2001, Col Jai Prakash Janu was commanding 120 Inf Bn(TA) and was deployed in Anantnag district of J&K. As the area of operation of the unit was active with militancy, the unit troops were involved in operations against the militants on a regular basis. The troops maintained a high level of alert and often moved in a convoy for security reasons. Col Janu was part of one such movement by convoy on 01 Mar 2001 along with Brigadier Bikram Singh, commanding 1 RR sector and other soldiers. However when the convoy the busy Janglat Mandi, 55 km from Srinagar, heavily armed militants ambushed the convoy at around 4 p.m.

Though the attack was very sudden and unexpected, the troops swung into action and counter attacked. A fierce gun-battle followed thereafter with the heavy exchange of fire. Col Janu received multiple gunshots but in a rare display of courage, he charged at the attacking militants to snatch his gun. Col Janu, despite being severely injured continued to direct his men to repulse the attack, till he collapsed. Col Janu later succumbed to his injuries and was martyred. Col Jai Prakash Janu was a valiant soldier and gritty commanding officer, who led his men from the front and laid down his life in the line of his duty.