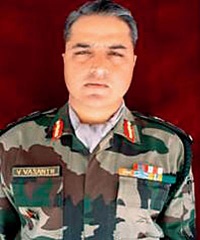 Colonel Vasanth Venugopal was born to Praphulla and NK Venugopal in Bangalore, India. His father’s work required the family to travel throughout the state of Karnataka, which made him study in a number of schools in various places including Udupi, Shimoga and Bangalore. He graduated from MES College, Bangalore in 1988. Col Vasanth in his student days was a brilliant student and a very good athlete as well. While in college, he was a member of the National Cadet Corps, through which he participated in the Indo-Canada World Youth Exchange Program of 1986-87.

Col Vasanth joined the Indian Military Academy, Dehradun in 1988 and on 10 June 1989, he was commissioned into 9 Maratha Li of the famed Maratha Light Infantry Regiment. In a military career spanning over eighteen years, he served in Pathankot, Sikkim, Gandhinagar, Ranchi, Bangalore and various sectors of Jammu and Kashmir.”I go where my men go”, he told his mother when she asked him if a colonel should participate in all operations conducted by his men. On 28 October 2006 he took over as Commanding Officer of 9 Maratha Light Infantry and the battalion was at that time deployed in Uri Sector of Jammu and Kashmir.

By July 2007, Col Vasanth had completed about 9 months as the Commanding Officer of his unit and faced numerous challenging situations by then. On 31 July 2007, his unit received information from the intelligence sources about a group of terrorists attempting to sneak across the Line of Control in Uri sector. Col Vasanth after analyzing the situation, decided to launch a search and destroy operation to deal with the terrorists. Realizing the critical importance of the mission, Col Vasanth himself took over the command of the operation and led a pre-dawn raid, against the terrorists.

Col Vasanth is survived by his wife Subhashini and daughters Rukmini and Yeshodha. His wife Mrs. Subhashini Vasanth is a renowned Bharatnatyam dancer and trains young aspirants in the classical art form. Her own experiences of being a martyr’s wife motivated her to reach out to other martyr families in her capacity as Founder, Director of Vasantharatna Foundation for Art which was set up in the memory of her husband.

The citation for the Ashok Chakra awarded to him reads:

On 31 July 2007, Colonel Vasanth V. Venugopal was commanding a Battalion of Maratha Light Infantry, on the Line of Control in the Uri Sector of Jammu & Kashmir. Colonel V  Venugopal received information about a group of terrorists attempting to sneak across the Line of Control. He personally took command of a body of troops and led a pre-dawn raid, against the terrorists. Outflanking them, Colonel Vasanth engaged the terrorists from close quarters, killing one of them. However, he himself was injured in this action. Unmindful of injuries, along with his troops blocked, all escape routes and killed two more terrorists before succumbing to his injuries. A brave leader of men Colonel Vasanth V. Venugopal led from the front in the true spirit of Indian Army and was awarded the Ashoka Chakra posthumously.

by Subhashini Vasanth, Veena Prasad
Forever Forty is a celebration of life. The life of Col Vasanth, AC – a life well lived – from growing up in a loving household and making wonderful friends, to marrying the woman he loved, raising beautiful children, and staying true to his calling till the very end. It is also a celebration of love. Love, expressed eloquently in more than four hundred letters he wrote home while posted on cold, rugged, inhospitable mountains, spending almost every New Year, birthday and anniversary away from family, while keeping intact his characteristic sense of humour, and writing so evocatively as to bring everything alive. These letters are juxtaposed with the stories related by his close friends and family, giving one a glimpse into his amazing personality – nothing short of inspiring.