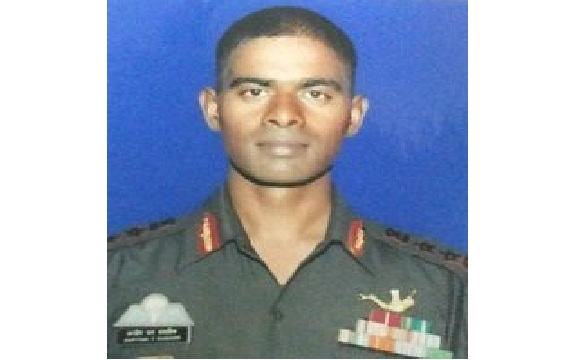 Colonel Santosh Yashwant Mahadik was born on 15th January 1977 in Pogarwadi in the city of Satara in Maharashtra. Son of a dairy farmer, Col Mahadik grew up to be a keen sportsman and was a champion boxer, goalkeeper, and runner. He did his schooling from Class VI onwards in Sainik School Satara in Maharashtra. While studying in the Sainik School his inclination towards the Armed Forces grew and the foundation of his future military life was laid. His resolve to join the Army grew with the age and consequently, he got selected for the prestigious NDA after finishing school. He later went to  IMA Dehradun and was commissioned as a Lieutenant in December 1998 at the age of 21 years. In the Army, he got trained in various disciplines and became a very adept paratrooper and combat underwater diver too.

Col Mahadik volunteered for the para training and got trained as a para-commando. He then served in the 21st Battalion (Parachute Regiment) as part of special forces known for its daredevil operations. As an officer of the elite 21 Para-Special Forces unit, Col Mahadik led many successful operations against militants in their hideouts in Jammu and Kashmir and in the northeast for over a decade. He was awarded the Sena Medal in 2003 for his bravery and leadership in counter-terrorist operations, during Operation Rhino in Lolab Valley in Kupwara. In the later part of his service career, Col Mahadik took over as commanding officer of 41 RR unit deployed in J & K for anti-insurgency operations.

It was believed that terrorists from the Lashkar-e-Taiba were active in the region. For a week, the terrorists, who had crossed the border, had been hiding in the Manigah forest. On 17th November, another operation was launched led by Col Mahadik himself to foil the attempt of the terrorists to infiltrate. During the combing operation the suspected infiltrators were spotted and on being challenged they opened fire at the troops. A fierce gun battle ensued with heavy exchange of fire from both sides. During the operation Col Mahadik got shot in the chest and was critically injured. The injured Col Mahadik was carried down the hill by one of the soldiers to a place near the roadhead. Evacuation by air was not possible as Manigah area was located in a narrow valley.  Gravely wounded, he was driven to 168 Military Hospital in Drugmulla, just off Sopore-Kupwara highway. From there he was airlifted to the Army's Base Hospital in Srinagar, but he succumbed to his injuries on the way. Col Mahadik was martyred but his bravery, indomitable spirit, and leadership were truly inspirational.

Besides being a brave soldier that he was, he was also an intellectual who wished more than anything to revive the natural beauty of Kupwara and revive tourism. He reconstructed old monuments and organized football and cricket matches to build bridges with the local community. He felt revival of tourism was the way, the youth could be given employment and diverted from radicalization. He sent the youth on tours to Jaipur’s Choki Dhani and Rishikesh to learn about village tourism and white-river rafting. He would personally counsel ex-militants and show them the path to a new life. From sessions on leadership for children to yoga camps and adventure tourism, Col Mahadik took the task of winning the hearts and minds of the people as earnestly as he took his field craft. He brought a perceptible change in public attitude towards the Army, during his tenure. Col SY Mahadik was a valiant soldier and an officer par excellence who led from the front and laid down his life in the line of his duty following the highest traditions of the Indian Army. Col Santosh Yashwant Mahadik was given the gallantry award, “Shaurya Chakra” for his extraordinary courage, leadership and supreme sacrifice.

Col Santosh Yashwant Mahadik is survived by his wife Smt Swati, daughter Kartikee and son Swaraj. Later carrying forward the legacy of her husband, Smt Swati Mahadik joined the Indian Army and was commissioned as an officer in the Army Ordnance Corps after she completed her training at the OTA in Chennai.

Life turned blissful when Swati got married to Col Santosh Yashwant Mahadik, a Para officer, who besides being a tough soldier, was a fantastic human being. She soon adapted to the Army life and felt proud to be a member of the large Army family.  The arrival of their daughter Kartikee and later son Swaraj brought added happiness in their lives.  But on 17 Nov 2015, her beautiful world turned topsy turvy, when she lost her husband, while he was leading a counter-insurgency operation in  J&K.  The edifice of her life came crashing down in a jiffy and the life suddenly looked meaningless to her. She was distraught, angry and terribly worried about her future and that of her children.

But she was a woman of strong will and determination. She took the tragedy in her stride and decided to take life head on.  A few months after Col Mahadik’s death, she stunned her family, and the military establishment by announcing her intention to join the Army.  She had already crossed the upper age limit for entering the army and it was only after the Ministry of Defence specially relaxed the age limit for her that she could become eligible to appear for SSB. Swati, a graduate from the University of Pune, began the intense training with tremendous dedication. With her outstanding perseverance and encouraged by his family, she cleared the Service Selection Board (SSB) interview in 2016.  She joined the Officers Training Academy (OTA), Chennai and quickly adapted to the gruelling sessions of the training.  She went on to excel in all aspects of training and won praise from all quarters for her commitment and grit.

At OTA, she was competing with the cadets much younger to her in age, but that did not deter her and she did very well in every aspect of training. The period was also emotionally draining for her, as she could barely speak to her children, but she had resolved to win over all challenges and trauma. Eventually she passed out in 2017 from OTA and was commissioned as a Lieutenant into Army Ordnance Corps. For the newly commissioned  Lt Swati Mahadik, it was no small feat by any stretch of imagination. The story of now, Capt Swati Mahadik, embodies courage, grit and determination and certainly is inspirational for young women of India.