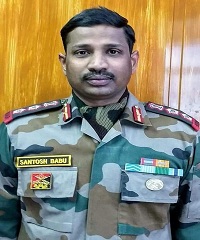 Col Bikumalla Santosh Babu was born on 13 Feb 1983 and hailed from the Suryapet district of Telangana. Son of Shri Bikumalla Upender Babu a banker and Smt Manjula a homemaker, Col Babu did his schooling from Sainik School Korukonda in Vizianagaram district of Andhra Pradesh. While studying in the Sainik School his inclination towards the Armed Forces grew and the foundation of his future military life was laid. His resolve to join the Army grew with the age and consequently, he got selected for the prestigious NDA after finishing school. He later went to  IMA Dehradun and was commissioned as a Lieutenant on 10 Dec 2004 at the age of 22 years. He got commissioned into 16 Bihar of the Bihar Regiment, an infantry Regiment well known for its dauntless soldiers and numerous battle exploits.

As a young Lieutenant, he got posted to Jammu as his first assignment. He soon evolved into a committed soldier and a fine officer with superior field-craft skills. Besides being a tough soldier he was very affable and caring which endeared him to his peers and subordinates as well. He also got selected to attend the prestigious course at Defence Services Staff College at Wellington, a tri-service Institute for Officers’ training. Later he was deputed to serve with the Rashtriya Rifles battalion deployed in J&K for counter-insurgency operations. During this tenure, he participated in a number of counter-insurgency and counter-infiltration operations and proved his mettle on various occasions.

After putting in few years of service he got married to Ms. Santoshi and the couple had a daughter Abhija and a son Anirudh Teja. As a Major, he also got selected to join the Indian contingent for UN Operations in Congo and took part in numerous operations there too. By 2020, he had put in around 16 years of service and had been promoted to the rank of a Colonel. On 02 Dec 2019 he was appointed as the Commanding Officer of 16 Bihar, his parent unit deployed in Ladakh.

During June 2020, Col Santosh Babu was commanding 16 Bihar battalion deployed in eastern Ladakh close to the Line of Actual Control(LAC) as part of Operation Snow Leopard. Since early June the tension along the LAC was building up due to construction work in Galwan valley close to the road going from Leh to Daulat Beg Oldie. The Chinese had a serious objection to the construction of a bridge across the Galwan river into the Aksai Chin area. The area held strategic importance to India as well as China as it dominated the road from Leh to Daulat Beg Oldie an airstrip of great military significance to India. There had been many rounds of talks between senior military officials from both sides to diffuse the tensions. On 15 June 2020 night, hectic Chinese activities were noticed across the bridge in Galwan valley and the Indian Army decided to take up the matter with Chinese forces to ask them to respect the LAC and adhere to the position as agreed earlier during the talks.

Considering the gravity of the situation, Col Santosh Babu himself decided to lead the negotiations. However, an altercation during the discussion raised the tempers leading to a scuffle. Soon the scuffle turned into a violent clash with the Chinese soldiers attacking Col Santosh Babu and his men with deadly clubs and rods. The Indian soldiers were greatly outnumbered and the Chinese soldiers seemed to be prepared for the attack. As the clashes escalated the Company commander of 16 Bihar also joined along with other soldiers to take on the Chinese soldiers. The clashes went on for many hours during which many Indian soldiers got seriously injured. Undaunted by the violent and aggressive action by the overwhelming strength of enemy soldiers, Col Santosh Babu continued to resist the enemy’s attempt to pushback Indian troops. Despite being grievously injured, he led from the front like a true military leader to deter the vicious enemy attack. He resisted the enemy attack till his last breath, inspiring troops to hold ground. Col Santosh Babu and 19 other soldiers later succumbed to their injuries and were martyred. The other brave hearts included Nb Sub Nanduram Soren, Nb Sub Satnam Singh, Nb Sub Mandeep Singh, Hav Bipul Roy, Hav Sunil Kumar, Hav K Palani, Naik Deepak Singh, Sep Ganesh Hansda, Sep Chandan Kumar, Sep CK Pradhan, Sep Aman Kumar, Sep Kundan Kumar, Sep Rajesh Orang, Sep Ganesh Ram, Sep KK Ojha, Sep Jai Kishore Singh, Sep Gurtej Singh, Sep Ankush, and Sep Gurvinder Singh.

Col Bikumalla Santosh Babu was a valiant soldier and an officer par excellence who led from the front and laid down his life in the line of his duty following the highest traditions of the Indian Army. Col Bikumalla Santosh Babu was given the nation’s second highest gallantry award, “Maha Vir Chakra” on 26 Jan 2021 for his extraordinary courage, leadership and supreme sacrifice.

The citation for the “Maha Vir Chakra” awarded to him reads :

Colonel Bikumalla Santosh Babu, Commanding Officer of 16 Bihar deployed in Galwan Valley (Eastern Ladakh) during Operation Snow Leopard, was tasked to establish an observation post in face of the enemy. Organizing and briefing his troops about the situation with a sound plan, he successfully executed the task. While holding the position his column faced stiff resistance from the adversary who attacked using lethal and sharp weapons along with heavy stone pelting from adjoining heights.

Undaunted by the violent and aggressive action by the overwhelming strength of enemy soldiers, the officer in the true spirit of service before self, continued to resist the enemy’s attempt to pushback Indian troops. Despite being grievously injured, he led from the front with absolute command and control despite hostile conditions to deter the vicious enemy attack at his position. The officer resisted the enemy attack till his last breath, inspiring troops to hold ground.