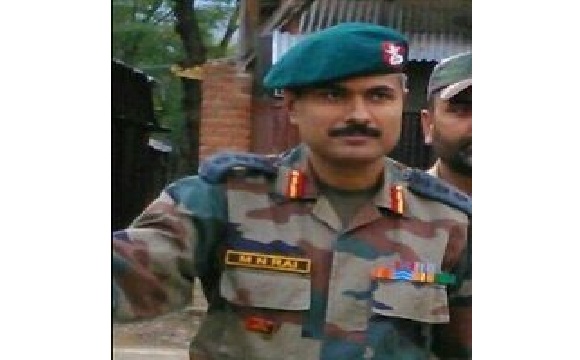 Place of birth : Ghazipur, U P

Colonel M N Rai hailed from Ghazipur in Uttar Pradesh. The youngest of the three brothers Col M N Rai was commissioned into the 2/9 Gorkha Rifles in September 1997. His eldest brother Lt Col D N Rai like him also belongs to the Gorkha Regiment, while his second brother Y N Rai is serving with the CRPF. Later, Col M N Rai was deputed to serve with the Rashtriya Rifles and took over the command of the 42nd Battalion of Rashtriya Rifles in May 2013.

By 2013, Col M N Rai had put in over 15 years of service and evolved into a committed soldier and a very fine officer. His unit, 42 RR was engaged in counter-insurgency operations and had taken part in various operations to contain militancy in the J & K. Col Rai was decorated with the Yudh Seva medal on the eve of Republic Day in 2015 for outstanding contribution in planning and conduct of operations including a gun battle with militants in south Kashmir in 2014.

By Jan 2015, Col Rai had completed nearly one and half years as commanding officer of 42 RR, which was responsible for counter-insurgency operations in Tral sector in Pulwama district of J & K. Tral had been a hotbed of militancy as it provided suitable terrain for militants to operate. On 27 Jan 2015, the unit had received credible information about the presence of terrorists in the village under its area of operational control. After analyzing the situation a decision was taken by the security forces to launch a joint operation by the Army, CRPF, and the police.

The suspected militants were hiding in a house which was soon surrounded by the security forces. On being challenged the militants started firing and a fierce gun battle ensued. At this point, reportedly, the father and brother of one of the terrorists informed the assault team that the ultras would surrender. Col Rai displaying good leadership and following the Army doctrine of WHAM(Winning Hearts and Minds), decided to give the militants an opportunity to surrender. The militants, however, took advantage of this act of compassion and started firing in order to escape. The forces soon cornered the militants after a while and gunned down the two militants. But during the heavy exchange of fire Col M N Rai got severely injured and later succumbed to his injuries. Col M N Rai was given the gallantry award, “Shaurya Chakra” for his cold courage, leadership and supreme sacrifice during this operation.

Col M N Rai was martyred in the operation but the exemplary courage and leadership skills displayed by Col Rai would always be remembered. Col M N Rai is survived by his wife Priyanka, daughters Alka & Richa and son Aditya. At the funeral of Col M N Rai, his daughter Alka then 11 years old made his Regiment and the entire nation proud by bidding her father a farewell with the Gurkha Regiment’s war cry, “Ayo Gorkhali” meaning ” The Gorkhas are here”.