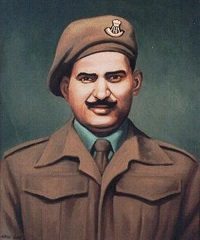 Company Havaldar Major Piru Singh Shekhawat was born on 20th May 1918 in Rampura Beri village in Churu district of Rajasthan. Son of Shri Lal Singh and Smt Tarawati Kanwar (Jarav Devi), he was youngest in the family and had three brothers and four sisters as his siblings. He had inclination to join the Army right from his younger days and eventually got selected through one of the recruitment camps. He joined the Army coincidently on his birthday on 20 May 1936 at the age of 18 years.

Initially he was sent to 10/1 Punjab but was later posted to 5/1 Punjab of the Punjab Regiment, one of well known infantry Regiments. Soon, he developed into a committed soldier and got promoted to the rank of Naik with in short period. He also served as an instructor in the Punjab Regimental Centre at Jhelum. In May 1945, he was appointed as Company Havaldar Major. He then participated in World War-II and served in Japan as part of Allied Forces. When he returned in Sep 1947 from WW-II Indian Army had undergone reorganization and consequently CHM Piru Singh was sent to 6 Raj Rif of the Rajputana Rifles Regiment.

During the Jammu & Kashmir operations in the summer of 1948, Pakistani raiders had captured the village of Tithwal in the hills of Kashmir and also pushed to seize control over the positions across the river Kishanganga. In order to strengthen the advance on the Tithwal sector, the British Indian Army dispatched the 6 Rajputana Rifles into Tithwal. The offensive began on 11th July and went on till 15th July. Two companies were sent to secure the features in this area. CHM Piru Singh was commanding the company ‘D’ which was to secure the first feature. The path to the enemy post, however, was a narrow ridge with deep ravines on either side and was overlooked by enemy bunkers, which put them in the direct line of fire of the enemy MMG posts. But he did not lose heart and inspired his men to push ahead crying, “Raja Ramchandra Ki Jai”, all the way.

Within half an hour of their advance, more than half of the company was down. CHM Piru Singh was leading the front sector. When the enemy fire rained heavily upon them, CHM Piru Singh advanced ahead to take out the MMG posts. Enemy grenade splinters ripped open his clothes and wounded several parts of his body. Yet, he advanced to eliminate the attackers from the hills. Rushing forward he bayoneted the crew of the enemy MMG and occupied the post. Most of his company had fallen by this time.

Injured and alone, he left the trench and pushed ahead to take out the second MMG post. Along the way, a grenade struck him and half his face was bleeding. His ammunition was spent and he was gravely injured, yet he did not back down. He threw a grenade into a trench of the second post. He bayoneted two men in another trench and thus secured the second MMG post. While emerging from the second post, he was struck in the head with a bullet and was seen dropping over the edge of the enemy trench. But a loud explosion could be heard in the third MMG post, affirming that CHM Piru Singh’s grenade had done its job. CHM Piru Singh fell to his injuries but had bravely and selflessly completed his mission.

For his profound bravery, extreme devotion and self-sacrifice to his motherland, CHM Piru Singh was given the nation’s highest gallantry award, “Param Vir Chakra” posthumously. The story of CHM Piru Singh continues to inspire millions of Indians and he will always be remembered for his lion-heart courage and love for his country.

South of Tithwal, ‘D’ Company, of which No 2831592 Piru Singh, was Havildar Major was detailed to attack and capture an enemy-occupied hill feature. The enemy had well dug in positions and had sited his MMGs so as to cover all possible approaches. As the attack advanced, it was met with heavy MMG fire from both flanks. Volleys of grenades were hurled down from enemy bunkers. Company Havildar Major Piru Singh was then with the forward-most section of the company. Seeing more than half of the Section killed or wounded, he did not lose courage. With battle cries, he encouraged the remaining men and rushed forward with great determination onto the nearest enemy MMG position. Grenade splinters ripping his clothes and wounding him at several places, he continued to advance without the least regard for his safety. He was on top of the MMG position wounding the gun crew with Sten gunfire. With complete disregard for his bleeding wounds, he made a mad jump on the MMG crew bayoneting them to death, thus silencing the gun. By then he suddenly realized that he was the sole survivor of the section, the rest of them either dead or wounded. Another grenade thrown at him wounded him in the face. With blood dripping from his face wounds in his eyes, he crawled out of the trench, hurling grenades at the next enemy position.

With a loud battle cry, he jumped on the occupants of the next trench bayonetting two to death. This action was witnessed by C company Commander who was directing fire in support of the attacking Company

As Hav Major Piru Singh emerged out of the 2nd trench to charge on the 3rd enemy bunker he was hit in the head by a bullet and was seen dropping on the edge of the enemy trench. There was an explosion in the trench which showed that his grenades had done its work. By then CHM Piru Singh’s wounds had proved fatal.

He had paid with his life for his singularly brave act but he had left for the rest of his comrades a unique example of single-handed bravery and determined cold courage.