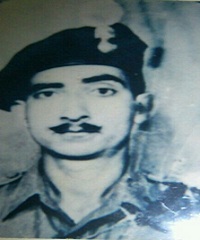 Company Havaldar Major Fateh Singh Jamwal hailed from Mian Behar village of Kullu, Himachal Pradesh. After completing his education he joined the Indian Army. He was recruited into 7 Grenadiers of the famed Grenadiers Regiment, a Regiment known for its intrepid soldiers and numerous battle exploits.

During the 1965 war with Pakistan, CHM Fateh Singh Jamwal’s unit was engaged in the great battle of Asal Uttar. Battle of Asal Uttar was one of the largest tank battles fought during the Indo-Pakistani War of 1965. It was fought from 8 to 10 September 1965, when the Pakistan Army invaded with its tanks and infantry into Indian territory, capturing the Indian town of Khem Karan 5 km from the International Border. The Battle of Asal Uttar was fought by 4 Mountain Division along with the troops of  7 Mountain Brigade, comprising three battalions of 4 Grenadiers, 7 Grenadiers, and 1/9 Gorkha Rifles. The other elements of 4 Mtn Div included 62 Mountain Brigade comprising 18 Rajputana Rifles, 9 Jammu and Kashmir Rifles and 13 Dogra,  Deccan Horse equipped with Sherman tanks, one  Artillery Brigade and other supporting troops.

4 Mtn Div planned to undertake its operation in two phases. In Phase I, 62 Mountain Brigade with an additional infantry battalion from 7 Infantry Division (1/9 Gorkha Rifles) was to capture territory up to the East Bank of the Ichogil canal and destroy bridges on the Ichogil canal. The additional battalion was primarily placed for the destruction of the bridges. In Phase II, 7 Mountain Brigade, with one squadron of Deccan Horse was to secure east of Ichogil canal from Ballanwala to the bridges north of The Pannu.

The Pakistanis launched their offensive at 0830 hours on September 08. The bridgehead operations were undertaken as a reconnaissance in force with two sqns of Chaffees and one squadron of Patton.  At this point, they were engaged by tanks of Deccan Horse. The Pakistani armor broke up into smaller groups and tried to infiltrate into the Indian defenses by carrying out an outflanking manoeuvre. At one stage, 1/9 Gorkha Rifles, 9 Jammu, and Kashmir Rifles and Headquarters 62 Mountain Brigade were surrounded. Utilizing standing crops, the tanks were engaged by Deccan Horse, medium guns and tank hunting teams. Deccan Horse managed to destroy 11 tanks while losing four of their tanks. Three other tanks were damaged by medium guns and tank hunting parties. Such heavy losses compelled the Pakistanis to retreat.

In the next two days, Pakistani forces lost many tanks and their soldiers. By September 10, the Pakistanis were in a desperate situation. They tried to outflank the defences from the west with two regiments of Pattons and a squadron of Chaffees with a motorised battalion. They were encountered by the tanks of 3 Cavalry and 8 Cavalry that were camouflaged in the sugarcane fields. Further, 4 Grenadiers was attacked with a battalion of infantry and a few Patton tanks. The attack on 4 Grenadiers failed, and at 1530 hours, the Pakistani outflanking armour charged on Mahmudpura and they were decimated by the Centurions lying in wait, crushing Pakistan’s 1 Armoured Division. On the evening of the same day, an attempt was made on the eastern axis by enemy armour penetrating close to Headquarters 62 Mountain Brigade and 7 Grenadiers, which fought relentlessly, compelling withdrawal by enemy armour at 2200 hours. CHM Fateh Singh Jamwal  and his other comrades of 7 Grenadiers fought gallantly and made Pakistanis run away. Just before the battle he, in fact,  had  written a letter to his family that the battle was over and he would get back home on leave.  However, On 10th November 1965, he got grievously injured and  succumbed to his battle injuries.

CHM Fateh Singh Jamwal was a valiant soldier who  laid down his life in the service of the nation in the highest tradition of the Indian Army.