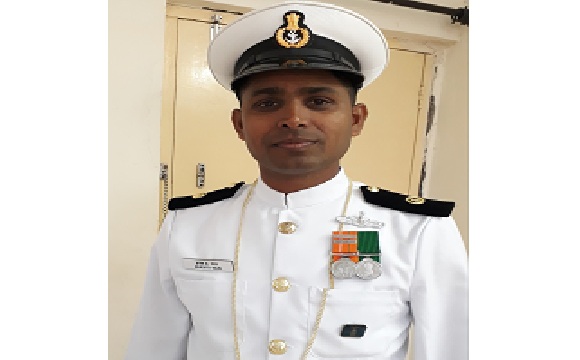 CPO Brijesh Kumar Yadav hailed from  Garhwa district of Chhattisgarh and was born on 13 Feb 1986. Son of Shri Nathu Prasad Yadav and Smt Soniya Devi, he completed his higher secondary from Govt. Multipurpose Hr Sec School at Ambikapur in Chhattisgarh. While studying at Ambikapur he stayed at his elder sister's (Smt Sushila Yadav) house, wherein his brother in law Shri Kedar Nath Yadav groomed him and motivated him to join the armed forces. Consequently after completing his school education he joined the Indian Navy as a sailor on 31st Jan 2006 at the age of 20 years. After joining the Navy he continued to pursue his studies and completed "Bachelor of Arts " from Andhra University Visakhapatnam.

After serving for few years, he got married to Ms. Raj Laxmi and the couple had a daughter ︎Shrishti and son Shaurya. During his service career, he completed " Gunnery Instructor " Course from INS Dronacharya at Fort Kochi and also underwent Training Technology (I Cadre Sailors) Course at NIETT (Naval Institute of Training & Technology) located at Naval Base Kochi in Kerala. By the year 2020, he had completed about 14 years of service and had been promoted to the rank of Chief Petty Officer. By that time he had developed into a committed soldier and a dependable Junior Commissioned Officer. He had received many awards and medals during his service career which included 9 Years Long Service Medal, Sea Service Medal and Flag Officer C-in-C (Commander In Chief) commendation by Eastern Naval Command.

During Nov 2020, CPO Brijesh K Yadav was serving at INS Sardar Patel. This Naval base was commissioned at Gujarat's Porbandar in the year 2015. The base has the Headquarters of the Naval Officer-in-Charge (Gujarat, Diu & Daman) and provides the logistic support to the Indian Navy units deployed in the Northern  Arabian Sea including along the International Maritime Boundary Line with Pakistan. The commissioning of INS Sardar Patel at Porbandar bolstered the capability of the Navy to handle the external threats along the coastline of Gujarat. It also made it possible to improve coordination and synergy with other maritime agencies. CPO BK Yadav was functioning as a Gunnery Instructor and took great pride in his job.

On 13 Nov 2020, CPO BK Yadav was travelling by road along with two of his junior sailors. Unfortunately their vehicle met with an accident on Gujarat Highway injuring all the occupants. The two sailors survived, but CPO BK Yadav succumbed to his injuries. Thus a dedicated soldier and committed sailor was lost in this tragic accident.

The nephew of CPO GI BK Yadav, Shri Aadarsh Yadav is managing a handle on Instagram (@indiannavylover) to carry forward the legacy of his uncle CPO GI BK Yadav. He uses this Instagram handle to post content related to the armed forces and other fallen heroes.