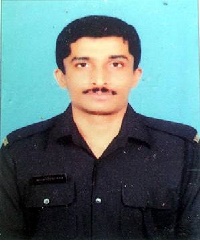 CFN Bharateshwar Rayappa Padanad belonged to Sankonatti village of Athani taluk in Belagavi district of Karnataka. CFN Bharateshwar Padanad, son of Rayappaa and Godavari Padanad, belonged to an economically-backward family. He had joined the Corps of EME of Indian Army in 2006 and served for nine years. He was part of the military convoy consisting of 29 personnel, which was ambushed by the militants, killing 18 and leaving 11 injured. The martyr is survived by his parents, wife Sangeeta and two children, Chiranjeevi and Hrutik, both less than five years old.

There had been militant activity in the border region of Manipur in early part of the year 2015. In response to this, 1,463-km of unfenced border between Manipur and Myanmar had been sealed and the Army and paramilitary forces had launched a major counter-offensive against the militants. On the 4th of June, the 6 Dogra infantry was heading to the capital of Manipur, Imphal in a 4-vehicle convoy. While they were crossing the Chandel district,on the way, they were ambushed by militants. Tribal guerrillas fired rocket-propelled grenades and detonated improvised explosive devices on the convoy, killing 18 soldiers and injuring another 11 soldiers.

It is believed that the attack by militants on the convoy was planned by a joint group comprising of cadres from NSCN(K), Kanglei Yawol Kanna Lup (KYKL) and Kanglapak Communist Party (KCP).The well-trained militants had planned the ambush beforehand and they triggered a landmine when the military convoy reached the area between Paralong village and Charong village in Chandel district. They also attacked the convoy with heavy automatic weapon firing from vantage points, and fired rockets and grenades. Most of the convoy, consisting of about 4 vehicles with 50 soldiers, was severely damaged and soldiers burnt to death on account of the blast. The few survivors were shot to death by the militants.

The incident was reported to be one of the most deadly attacks by militants in the area. CFN Rayappa Padanad was one of the 18 brave soldiers who died in this horrendous ambush.   The martyrs of this incident were brought to their hometowns where they were cremated with full military honours. Hundreds of civilians and army personnel paid their tributes. The supreme sacrifice of CFN Bharateshwar Padanad and his fellow soldiers will always be remembered by the countrymen with deep respect and honour.