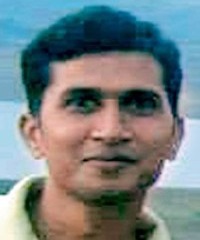 Commander Shishir Kumar Yadavannavar hailed from Belgaum district of Karnataka. Son of Shri Shivarudrappa Yadavannavar and Smt Ningavva, Cdr Shishir studied in Kendriya Vidyalaya in Belgavi and later completed his engineering from Gogte Institute of Technology in Belgavi. Cdr Shishir since his younger days wanted to follow into the footsteps of his father who served in the Army in Army Medical Corps. Eventually he joined the Navy after completing his graduation.

During the year 2014, Cdr Shishir was serving with the Eastern Naval Command of Indian Navy at Visakhapatnam. An expert on Naval weapon systems, he was functioning as a weapon officer of the National Armament Inspection Office of Eastern Naval Command (ENC). He was attached to Naval Science & Technological Laboratory (NSTL) a lab under DRDO at Visakhapatnam which undertook research and development of naval weapons and related systems (underwater mines, torpedoes, fire control systems, weapon launchers, targets, decoys). During Oct -Nov 2014, Cdr Shishir was involved in user evaluation trials on Torpedo Recovery Vessel (TRV-72) along with NSTL.

On 06 Nov 2014, Cdr Shishir embarked on Torpedo Recovery Vessel (TRV-72) from INS Ranvir after user evaluation trials. However sometime later flooding was reported in the TRV-72 steering gear compartment. Cdr Shishir realizing the gravity of the situation immediately swung into action and launched efforts to contain flooding. As the efforts yielded no results and the situation became grave, Cdr Shishir launched evacuation operation to move maximum people to safety. Leading from the front Cdr Shishir, displayed courage and camaraderie of a very high order and saved the lives of many civilians and navy personnel. The vessel eventually could not be saved and sank about 35 nautical miles south of Vizag and 28 nautical miles from the closest point of the coast. Cdr Shishir and three Navy personnel went down along with the vessel and laid down their lives in the line of their duty. Cdr Shishir was a valiant soldier and gritty officer who made the supreme sacrifice, following the highest traditions of Indian Navy. Cdr Shishir Kumar Yadavannavar was given “Sarvottam Jeevan Raksha Padak” by the Chief of Naval Staff for his outstanding bravery, leadership and supreme sacrifice.