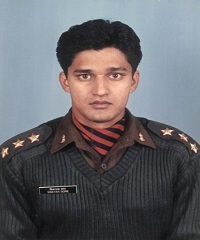 Regiment : The Regiment of Artillery

Captain Vinayak Gore was born in Vile parle, a suburb of Mumbai, to Mr Vishnu Gore and Mrs Anuradha Gore. He completed his school education from Parle Tilak Vidyalaya in Vile parle, Mumbai and graduation in Commerce from N.M. College of Commerce in Mumbai. He was a passionate sportsman, who excelled in swimming, football and hockey. Capt Vinayak in his student days was a keen footballer and represented N M college at various inter-college football meets. He was popularly known as “Maradona” among his friends and according to them his football skills were so extraordinary that he would have surely earned a place in the national football team.

But Capt Vinayak, greatly inspired by the lives of Shivaji Maharaj and Veer Savarkar, had a deep interest to serve in the army. He made his intentions clear when he left his article-ship of Chartered Accountancy halfway to appear for the Combined Defence Services Examination. His father was initially reluctant but later relented looking at the enthusiasm and profound desire of his lad.

He passed out from Indian Military Academy(IMA), Dehradun on 12 June 1991 and was commissioned in Indian Army as Second Lieutenant of the 31 Medium Regiment of the Regiment of Artillery. After commissioning , he had a brief tenure in Punjab and then was posted to Jammu & Kashmir in 1992.

During 1995, Capt Vinayak’s unit was deployed in Kupwara sector of J & K, which was a terrorist infested area. Capt Vinayak’s duties included creating gun areas, taking part in road opening missions, cordoning off villages in tense situations and conducting search operations on getting information about  presence of terrorists from intelligence sources. On 26th Sept 1995, Capt Vinayak was manning a post on the border which was targeted by the enemy forces on a regular basis.

Taking advantage of the ongoing Navratri festival during that time, the enemy forces resorted to unprovoked firing at the border posts. The post manned by Capt Vinayak came under heavy attack on that day and a fierce exchange of fire ensued. Capt Vinayak within three and half of his service, had evolved into a battle hardened and committed soldier who commanded great respect from his comrades. Under the command of Capt Vinayak, his post gave befitting response to the enemy firing but a missile targeted at his post directly hit him. Capt Vinayak succumbed to his injuries and a valiant soldier was martyred, in the service of the nation. The gallant soldier that shouted the slogans for the country had been silenced and he breathed his last, cozily cradled in the lap of the motherland, he loved and fought for.