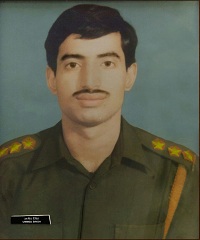 Captain Ummed Singh Rathore was born on 22nd January 1968 in Tiberi in Pali district of Rajasthan to Mr Bhanwar Singh Rathore and Mrs Suwa Kanwar.  He had his school education in Sainik School at Chittorgarh, where the foundation of his disciplined life was laid. He was always inspired by his father to join the army and his days at the Sainik School gave an impetus to that inspiration. Following his dream, he joined the prestigious NDA ( 79 NDA course ) and passed out  along the coveted award for being the best cadet during the training.

Later, Capt Ummed Singh joined the 89th course in  Indian Military Academy in Dehradun. At IMA he learnt the skills of field craft and took keen interest in various sports activities including horse riding. After completing his training in IMA , on 13th June 1992 he was commissioned  into 21 Sikh of the famed Sikh Regiment, a regiment known for its valour and numerous battle honours in various operations.

In 1994, he was promoted to the rank of lieutenant when his unit was deployed in the terrorist-infested J & K. Very soon in the unit, then Lt Ummed Singh got an opportunity to take part in an anti-terrorist operation. On getting information from the intelligence sources about the presence of terrorists in the area of operation of his unit, a decision was taken by the unit to launch a search and destroy operation. Lt Ummed Singh was made part of the team to undertake that operation.

During the operation the team soon spotted the terrorists, who on being challenged opened fire at the troops. A fierce gun-battle ensued and Lt Ummed Singh along with his comrades managed to kill two terrorists. However during the exchange of fire, one of the officers got injured and needed medical attention. Lt Ummed Singh having realized the gravity of the situation, used his troops tactically and took immediate steps to move the officer to safety. He was awarded “Sena Medal” for his courage, camaraderie and unyielding fighting spirit. In the later part of 1994, he was promoted to the rank of Captain and he also got married to Ms Mamta in the same year.

During Dec 1994, Capt Ummed Singh’s unit was deployed in the Drass sector of Kargil district of J & K. During December the area with sub zero temperatures had very hostile operating conditions. The area was also prone to snow blizzards and deadly avalanches. Capt Ummed Singh’s post was located at 19000 feet and they had to frequently take the treacherous route to the post from their base camp.

On 08 Dec 1994, when Capt Ummed Singh along with his troops was on the way to their post, a horrific avalanche hit the area. They got swept away and got buried under 30 feet of snow. The avalanche was so intense and sudden that the troops did not get any time to react and got buried. A massive rescue operation was launched  by the army subsequently but the bodies of the soldiers could not be found. Finally the bodies of Capt Ummed Singh and other valiant soldiers were recovered after five months in May 1995.

Tribute by his Friend:

“I will always do my duty, no matter what the price.

For my country and tri-colour will fight till my last breath.”

“A soldier dies only when his country

forgets him, his supreme sacrifice.”

“They never die for fame or name, neither do they die for money, awards or pension. They give their life, their family and future for the sake of our safety, comfort and happiness”.

Heaven was needing a hero somebody just like him, brave enough to stand up , for what he believed and followed it though.

Tribute by his Comrade Kartar Singh:

“It was 7 December evening in 1994, when I was last with captain sahab and Rifleman Manjeet. We were all there in a barrack  writing  letters to families. Captain Sahab who had just written “ माँ “ in his letter and Manjeet had hardly written anything, when they were called by Major sahab to immediately report to him. They gave letters to me saying , ‘tum apna pura karo, hum aakar apna pura karenge (letter), abhi  isse  sambhalkar  rakh do, but both of them never came back to finish their letters. The word “माँ “ in his last letter touched the hearts of all unit soldiers. Even today tears well up in my eyes whenever I think about our last meeting. I wish Capt Rathore had come back to complete the letter to his mother”.