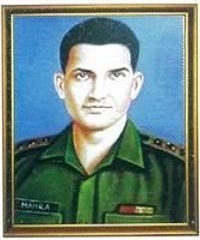 Capt Ummed Singh Mahra hailed from Champawat tehsil in Almora district of Uttarakhand and was born on 21st Jan 1942. Son of Shri Kunwar Singh, he graduated from the Indian Military Academy on 11 June 1967 at the age of 25 years. He was commissioned into 19 Raj Rif of the Rajputana rifles Regiment, an infantry Regiment with a rich history of gallantry and various battle honours.

During July 1971, Capt Ummed Singh Mahra’s unit was deployed in Nagaland as part of Operation Orchid. As a number of insurgents were active in the AOR(Area of Responsibility) of the unit, the unit troops were regularly engaged in counter insurgency operations. Capt Mahra was tasked for one such operation on 05 July 1971. Based in the information from the local intelligence network about the HQs of a local insurgent group a search and destroy operation was planned. As per the plan Capt Mahra along with his 60 soldiers set off for the location on 05 July 1971. After walking for nearly 12 hours through rugged and inhospitable terrain, Capt Mahra and his men reached the suspected area.

After studying the terrain near the insurgents’ camp, Capt Mahra decided to launch a multi-directional attack to achieve the element of surprise. He deployed his troops tactically and attacked the camp form two directions. As the troops reached within 30 meters of the camp, the militants panicked and started firing indiscriminately at the troops. Capt Mahra leading from the front charged at the camp with full force. He single-handedly eliminated many militants but sustained serous injuries during the exchange of fire. Despite being seriously wounded, he continued to battle and kept directing his troops. Inspired by the gallant action of Capt Mahra, his soldiers fought aggressively forcing the surviving militants to flee leaving behind a huge cache of arms and ammunition. However Capt Mahra later succumbed to his injuries and was martyred.  Capt Ummed Singh Mahra was a valiant soldier and gritty officer who led from the front and laid down his life in the line of his duty. Capt Ummed Singh Mahra was given the nation’s highest peace time gallantry award, “Ashok Chakra” for his conspicuous bravery, leadership, devotion to duty and supreme sacrifice.

Citation for Ashok Chakra awarded to him reads:

In July 1971, Captain Ummed Singh Mahra was posted in Nagaland with 19 Rajputana Rifle. On 5 Jul 1971 , He led a raiding party with 60 men against the headquarters of an rebellious group in Nagaland. After walking for 12 hours and crossing difficult mountainous terrain and overflowing nallahs they reached near about 500 mts away from the insurgents’ camp. To surprise the militants, Captain Ummed Singh Mahra was divided the group into several parties and attacked the camp from two directions. When the platoon was 30 mts away from the camp, the militants started intense firing. Retaliating immediately Captain Ummed Singh Mahra charged at the camp firing from his weapon. In the ensuing fight, he shot dead the militants but sustained serious injuries. Despite being seriously wounded and profusely bleeding, he continued to battle and encourages his men to charge at the camp. Inspired by the brave action of their leader the platoon led a gallant charge. Trapped by surprise and courageous action the militants fled leaving behind their dead, arms and ammunition. Captain Mahra endured the long journey back before succumbing to his injuries. For his incredible leadership and bravery, Captain Mahra was awarded posthumously the Ashok Chakra.