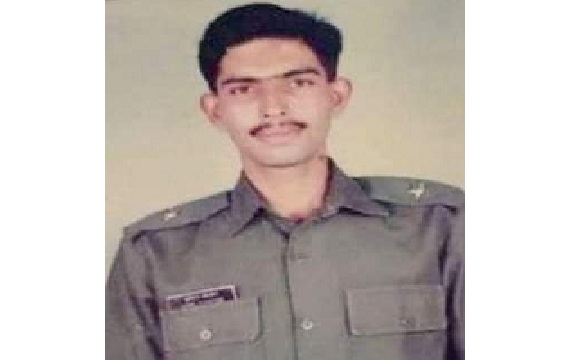 Captain Sunil Khokhar hailed from Kansala village in the Rohtak district of Haryana and was born on 5 May 1966. Son of an army veteran Hony Capt Satish Kumar Khokhar who served in the army for 28 years and Smt Surajmukhi Devi, Capt Sunil did his schooling at Model School, Rohtak.  He was inclined to join the armed forces like his father since his younger days and continued to follow his dream while growing up.  Thereafter, he completed his graduation from University college Rohtak. Following his passion he eventually passed the Combined Defence Services Examination and got selected to join the OTA Chennai. He passed out from Officers’ Training Academy in Chennai on August 24, 1991 as a Lieutenant at the age of 25 years. He was commissioned into the 268 Medium Regiment of the Regiment of Artillery, the second largest arm of Indian Army.

During May 1994, Capt Sunil Khokhar's unit was deployed in Siachen Glacier in Ladakh as part of "Operation Meghdoot" under the command of Col Gurdeep Narang.  At the Siachen glacier, Sunil Khokhar and his troops were braving the hostile weather as well as the enemy forces across the undefined border. Besides facing extreme weather conditions, Capt Sunil Khokhar and his troops had to deal quite often with unprovoked firing from the enemy forces. In the early hours of May 5, 1994, the probing action launched by the enemy resulted in heavy exchange of fire with a planned attempt on part of the enemy to capture the strategic 'Pahalwan' post. It also happened to be the 28th birthday of Captain Sunil Khokhar. After blunting the enemy attack, a patrol was launched at 9 pm, which located the enemy camp site.

Capt Sunil Khokhar engaged the camp site with artillery fire and inflicted heavy damage on the enemy. On May 7, 1994, Capt Sunil Khokhar was detailed to accompany a subsequent patrol for directing artillery fire on the camp site. He took initiative to carry out silent registration of targets before going with the patrol; to bring down artillery fire on the registered target on call at shortest notice. While carrying out his task, apparently, the enemy spotted him and he was heavily fired upon. Capt Sunil Khokhar displayed great courage, showing absolute disregard to personal safety and continued to carry out the registration of targets. While he was in the process of registering the remaining two targets, a burst of fire from the enemy caught him on the neck. He got severely injured and later succumbed to his injuries upholding the Gunner's motto 'Sarvatra Izzat-o-Iqbal'. Capt Sunil Khokhar was a valiant soldier and a gritty officer who laid down his life at the age of 28 years in the service of the nation.

Capt Sunil Khokhar was given the gallantry award, “Vir Chakra” for his outstanding grit, determination, devotion to duty and supreme sacrifice.

The citation for the "Vir Chakra" awarded to him reads:

On 20 February 1994, Captain Sunil Khokhar volunteered to remain at an Observation Post located at a height of 19,856 feet in Jammu & Kashmir, even beyond his scheduled tenure of 45 days. On 05 May 1994, the enemy launched a probing action with definite planned attempt to capture the strategic post. This resulted in a heavy exchange of fire. After blunting the enemy attempts, a patrol was launched and at about 2100 hours the patrol party was able to locate the enemy camp site. On 7 May 1994 Captain Sunil Khokhar was detailed to reconnoiter and carry out the assigned task. While carrying out the assignment, the officer came under enemy's small arms. Displaying courage and utter regard to his personal safety, he continued with the task till the time an enemy bullet pierced through him and he made the supreme sacrifice.

Captain Sunil Khokhar displayed courage and dedication beyond the call of his duty.