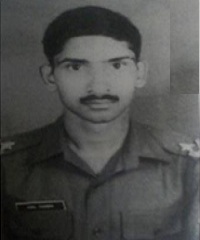 Operation Pawan was the code name assigned to the operation by the Indian Peace Keeping Force(IPKF) To take control of Jaffna from the Liberation Tigers of Tamil Eelam(LTTE), better known as Tamil Tigers, in late 1987 to enforce disarmament of the LTTE as a part of the Indo-Srilanka Accord. In brutal fighting lasting about three weeks, the IpkF took control of the Jaffna peninsula from the LTTE.TheIPKF routed the LTTE at the cost of 214 soldiers and Officers. The operation lasted from 11-25 October 1987.

On Oct 16th, 1987, Captain Sunil Chander received news that another company located at Annalkoddal had been surrounded by the LTTE and repeatedly attacked by the militants causing heavy casualties and running low on ammunition. The soldiers needed an immediate replenishment of ammunition. Helicopters were used to resupply but it failed due to militants directing heavy fire at it. Captain Sunil Chander along with 15 men were detailed to take the reinforcements to the company. He left Uduvil at 7 p.m on 16th October. They had to physically make their way, loaded with supplies that would slow them down. The squad broke through the tight LTTE cordon despite being wounded grievously by enemy fire. The captain, himself got wounded in the leg. They incurred eight casualties and reached the besieged company on 17th October, when it was left with just six rounds of 7.62mm and two grenades. He was hit by a medium machine gun burst in the chest but crawled on till he reached the company with the life-saving supplies. Captain Sunil Chander later succumbed to his injuries. He was awarded the Vir Chakra posthumously for displaying conspicuous courage and valiant leadership in the face of militants.

The citation for the Vir Chakra awarded to him reads as:

Captain Sunil Chander was deployed in Sri Lanka as part of the Indian Peace Keeping Force. He was Company Commander of an Infantry Batallion. A unit located at ANALKODDAL was surrounded and repeatedly attacked by the militants on the 16th of October,1987 resulting in heavy causalities and necessitating immediate replenishment of ammunition. The supply of ammunition by helicopter failed due to heavy fire. The officer with15 men were detailed to take ammunition replenishment. All routes to the company were blocked by the militants. Captain Sunil Chander left Uduvil at 1900hrs on 16th October 1987, fought his way through despite himself getting wounded in the leg and his party suffering eight casualties and reached the besieged company located at ANNALKODDAL.

on 17th October 1987, when the company had been left with six rounds of 7.62mm and two grenades. In the process, he was hit by an MMG burst in the chest but crawled on till he reached the company and handed over the ammunition. Subsequently, he succumbed to his injuries.