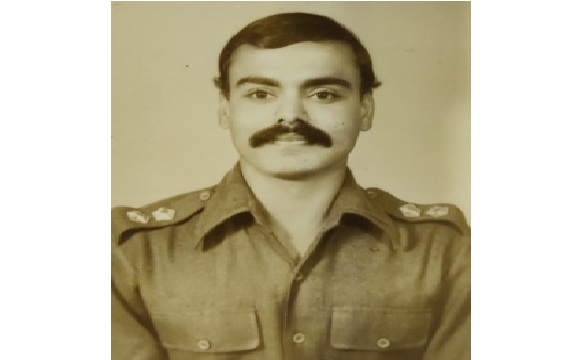 Capt Sudhakar Madhavan hailed from Chennai in Tamil Nadu and was born on 01 Jan 1956. He always nursed the idea of serving in the Armed Forces since his younger days, which got further strengthened when he joined the NCC during his student days. Eventually his dream came true when after completing his MA First year at Pachaiyappa College, he got selected to join the Officers Training Academy at Chennai in May 1977.

He got commissioned on 18 mar 1978 as Second Lieutenant at the age of 22 years. He was commissioned into 65 Armoured Regiment of the Armoured Corps, the potent combat arm of the Indian Army well known for its tanks and other heavy weaponry. Raised after the Indo-Pak war of 1965, on 1 September 1966, as the 65th Cavalry, its designation was changed to 65th Armoured Regiment in August 1967.  The regiment was initially equipped with the up gunned Sherman Mk IV and Mk V tanks. Later it became one of the first regiments in the Army to be equipped with T-72 tanks. Soon he got promoted to the rank of Captain and developed into a committed soldier and fine officer who took immense pride in being a part of 65 Armd Regt.

After serving for few years Capt Sudhakar Madhavan got married to Ms Shobha on 06th Sept 1984 and the couple had a son Abhishek. Besides being a deep rooted soldier, he had keen interest in football and rifle shooting. He played football during his college days and also represented his Regiment in various tournaments. He got posted to 3 (Independent) Brigade at Jammu in the year 1984 and then to Jhansi in June 1987.

During 1987, Capt Sudhakar Madhavan was serving with his Regiment at Jhansi. After the induction of Indian forces in Aug 1987, as part of Indo-Sri Lanka accord signed on 29 July 1987, the militants were supposed to surrender but the dreaded LTTE backed out and unleashed war on Indian forces. Initially only 54 division of the Army was inducted but the escalation of the operations brought three more divisions 3, 4 and 57 into the conflict. 65 Armd Regt was one of the first units to reach Sri Lanka, arriving in Jaffna in October 1987. Capt Sudhakar Madhavan along with a troop of tanks of "A" squadron of the Regiment was the first to be airlifted to Jaffna on 12 Oct 1987.

Capt Sudhakar Madhavan's Regiment performed a wide variety of roles including clearing road-blocks, keeping railways and roads open, ambushes and raids. On 17/18 Oct 1987, Capt Sudhakar Madhavan's Regiment was tasked to support the troops of 72 & 115 Infantry Brigades functioning under the operational control of under 54 Infantry Division in the battle of Jaffna University. However, during the heavy exchange of fire in this battle, some of his comrades got injured and were trapped inside a tank. Capt Sudhakar Madhavan in a daring move decided to rescue his trapped soldiers without caring for his won safety. However while doing so, he got seriously wounded. He later succumbed to his injuries and was martyred. Capt Sudhakar Madhavan displayed gallantry, professional skill and devotion to duty of a very high order during the operation.

The first time we met, the first thing he asked me was whether I knew about army life and whether I was mentally prepared for it - that was our first romantic meet. We got married on Sept 6 1984in Chennai and I remember him asking us if we would like to have the Lance Naiks from the Regiment at the wedding – A whole 27 years later, in 2011, when our son got married in Delhi, the Regiment sent Lance Naiks to be part of the ceremony – It was as if Sudhakar was there himself and goes to show the kind of life-long bond that you make in the Army.

Immediately after our wedding, we proceeded to 3 (I) Armd Brigade rathnuchak Jammu and Sudhakar was posted as staff captain “Q” and we were there from sept 1984 to may 1987. Our son - Abhishek was born then in June 1985 and Sudhakar was at the top of the world. He had the name registered as Sudhakar Abhishek, to avoid being called by his father’s name Sudhakar like he was often addressed then – Abhishek is still called Sudhakar by most of his friends and colleagues and he couldn’t be prouder. He always used to talk about his son joining the Air force and how proudly he would stand in the balcony and watch his son fly by - this is the only dream I failed to fulfill. He used to spend every minute of his spare time with Abhishek.

Sudhakar had an excellent exposure when he was also asked to officiate as DQ and when Brig Vinod Saigal took over as commandant they shared a very special rapport because both of them loved the environment and Sudhakar took special care to convert the open space in front of our house into a lovely landscaped park.  Brig Ricky, the Commandant in May 1987 commended Sudhakar at the farewell dinner and often used to call him "Black knight” because during the operations in Jan 1987,Sudhakar used to tie the black scarf around his face and and one could only see the alert eyes. He also said a day will come when Sudhakar would come to command the brigade. He loved to host regimental officers at home and my first novice lunch was served to Gen Arun.

I still remember the night when the call from Col. Khanna came – We were hosting a bachelor party for one of the officers at our house and suddenly he was asked to report and was asked to proceed to Jaffna to take part in OP Pawan. We left by train the same night to Chennai and through the entire journey he kept assuring me that we would go back to Babina within 6 months. In Chennai, we went straight to his parents house and and surprisingly he insisted that I stay with my parents when he was away and he dropped me there and and left with a broad smile at 1.30PM on October 8th – That would be the last time I see him. Take care of Abhi were his last words to me. He called me last on Oct 12th morning and told me he was in Urumpurai and everything was fine and that he had sent some gifts through a Jawan coming to Chennai – That was the last time we spoke.

On Oct 18th there was call from Srilanka at 8.45 pm which my father thought it was from Sudhakar and handed me the phone but they insisted on speaking to my father. My father could not understand the Hindi and gave it back to me and then I gave it back to my uncle who understood Hindi better – The look on his face told me that my entire world had come crumbling down. My father had the most difficult task of delivering the news to my in-laws late in the night.

Sudhakar had fulfilled his wish of serving the nation but we were at a loss coming to terms with it. I was in a daze and complete shock for weeks after that and when everyday regiment officers and sometimes ladies used to drop in and my son used to get excited seeing the jonga presuming his dad had come. Sudhakar was just 30 and myself 27 years when this happened. He was so full of life and we had such dreams of our lives together. When I returned back from the funeral on 19thI received the letter lastly written on 16th asking me to take good care of our son and about the gifts he had sent and almost as sort of a premonition, he had mentioned the box where he had kept the will. For his parents their youngest and favorite son was lost.

All of these memories seem like they happened just yesterday. In 1988 when we went to the hut of remembrance on his first Anniversary I saw the words of field Marshall Philip Chetwode inscribed on the altar and especially the last lines namely...

Made me realize that for him, his country was his first priority because he had been born a soldier and would defend his country till his last breath. I have had the privilege of visiting the OTA every year for the last 33 years with my son, mother, brothers and their families who have been my biggest pillar of support all these years.