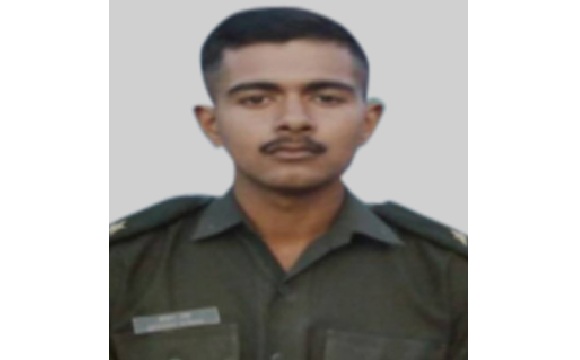 Capt Shekhar Ghosh hailed from Barrrackpore in North 24 Parganas district of West Bengal and was born on 27 Sep 1975. Son of an army veteran late Lt Col Shankar Nath Ghosh and Smt Ira Ghosh, Capt Shekhar had a sister Mani as his sibling. He spent his childhood in Barrackpore and later moved to Delhi where he passed his Class XII Board exam in science from Kendriya Vidyalaya, Delhi Cantt. Subsequently he completed his graduation with  English Honours from Ram Lal Anand college under Delhi University in 1996. Capt Shekhar always wished to follow in the footsteps of his father and don military uniform. He joined senior division NCC during his student days and was decorated with DGNCC’s commendation card in 1995 for his excellent performance as a cadet.

He also excelled in shooting during his college days and won many laurels at various National Level Shooting competitions. Though Capt Shekhar became an English(Honours) graduate, he continued to follow his passion and eventually got selected to join the Army through Combined Defence Services Examination. He joined the prestigious IMA Dehradun in the year 1996 and passed out as a Lieutenant on 06 Dec 1997. He was commissioned into the Army Service Corps, an important logistic arm of the Indian Army.  He was posted to serve with 2 Sikh, an infantry battalion as his first assignment which was deployed at J&K.

After joining his unit, he soon made a mark with his superior physical capabilities and soldierly skills. As the unit's AOR (Area of Responsibility) fell in the region affected with militants' activities, Capt Shekhar got involved in many counter-insurgency operations and proved his mettle as a committed soldier.  He was awarded the “Best Young Officer's’ Trophy in 1999 for his overall performance in the formation and was also decorated with a COAS Commendation card on 26 Jan 2000.

During August 2000, Capt Shekhar Ghosh's unit was deployed in the Rajouri district of J&K. The unit troops were engaged in operations against the terrorists on a regular basis as the unit's area of responsibility (AOR) was active with militancy. The area was also prone to infiltration, which necessitated regular armed patrols to check any infiltration from across the border. The AOR of the unit also spanned over dense jungle and remote rugged mountainous terrain with extreme weather conditions, especially in the winter season. Following inputs from the intelligence sources about the presence of some terrorists, 2 Sikh launched an operation in Namblan village of Rajouri district. Capt Shekhar Ghosh was leading the team that launched the search and cordon operation.

On 11 Aug 2000, as planned Capt Shekhar along with his troops reached the suspected area in Namblan village in Rajouri district and launched the search operation. On seeing the troops, the terrorists opened fire and a fierce gun battle ensued thereafter lasting several hours.  At 11 30 hours, as his team was closing in, it came under effective fire from well-entrenched terrorists. Seeing his troops injured and pinned down, Capt Shekhar swung into action and fired at the terrorist and eliminated him, thereby saving his entrapped comrades.  Later in the evening, Capt Shekhar displaying audacious initiative moved dangerously close to the hideout and shot dead another terrorist. The operation continued over to the next day, but Capt Shekhar and his troops did not loose the nerve and kept relentless pressure on the terrorists.

On 12 Aug morning one of the entrapped terrorists, having lost patience came out of his hideout firing indiscriminately. Seeing his comrades in danger, Capt Shekhar with utter disregard for personal safety, charged at the terrorist without waiting for fire cover. However, while doing so, Capt Shekhar received a direct hit and was grievously injured. He soon succumbed to his injuries and was martyred. Capt Shekhar Ghosh was a gallant soldier and a committed officer who laid down his life before he could turn 25, in the line of his duty.  He was given the gallantry award ” Shaurya Chakra ” for his outstanding courage, leadership, camaraderie and supreme sacrifice.