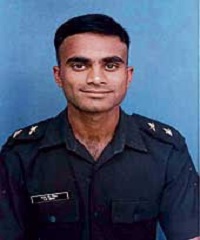 Captain Shashi Bhushan Singh hailed from Gangtok in the state of Sikkim. Son of Shri Rameshwar Singh and Smt Mridula Singh, Capt Shashi Bhushan was very hardworking and focused since his childhood. He studied from Daffodil’s Home and West Point School in Gangtok before leaving for RIMC Dehradun after Class VIII.  It was in RIMC Dehradun, where his dream of joining the armed Forces took shape and the foundation of his Army life was laid. He got selected to join the prestigious NDA and then went to IMA Dehradun for further training.

He passed out of IMA Dehradun in the year 2003 and got commissioned into the Corps of Engineers, the Corps responsible to provide mobility to own forces by constructing bridges, tracks and helipads; on the other hand the Corps denies the same to the enemy by creating obstacles such as laying mine-fields and demolition of bridges. As his first assignment he joined 236 Engineers regiment of the Bengal Sappers deployed in J & K.  During 2005, while serving in Udhampur district of J & K , he proved his mettle as a gallant soldier and killed three out of five terrorists in a counter-insurgency operation. He was given the gallantry award, “Sena Medal” for his bravery and leadership skills during that operation. After serving for few years with his parent unit Capt Shashi Bhushan was deputed to serve with 55 RR battalion deployed in J & K for operations against the insurgents.

During 2006, Capt Shashi Bhushan’s unit was deployed in Pulwama district of J&K and was engaged in operations against the militants on a regular basis. Based on the information received from the intelligence sources about the presence of terrorists the security forces decided to launch a search and destroy operation in Pulwama district falling in the area of responsibility of 55 RR.   Consequently on 23 June 2006, Capt Shashi Bhushan along with his team of soldiers set out to the suspected area to launch the operation. While the operation was underway, the terrorists fired at the troops on being challenged and a gun battle ensued thereafter.

During the exchange of fire Capt Shashi Bhushan got hit by a bullet, which entered through his neck and punctured his lungs. He was rushed to the military hospital but he later succumbed to his injuries and was martyred. Capt Shashi Bhushan was a valiant and committed soldier who laid down his life in the service of the nation. He was given the gallantry award, “Shaurya Chakra’ for his outstanding courage, fighting spirit and supreme sacrifice. The grit and determination of Capt Shashi Bhushan could be gauged from the fact that he achieved the distinction of receiving two gallantry awards in his short service career.