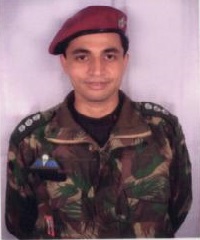 Capt Sajjan Singh Malik hailed from Kirtan village in Rajgarh tehsil of Churu district in Rajasthan. He studied form Rashtriya Military School Belgaum and followed into the footsteps of his father who served in the Army in the Jat Regiment. His education in the Military school laid the foundation of soldierly qualities in him which were further honed in NDA and IMA Dehradun.

After passing out form IMA, he was commissioned into 10 Para(SF) the elite special forces battalion of the Parachute Regiment. Raised on 01 June 1967, 10 Para(SF) are known as “Desert Scorpions” as officers and jawans of this unit are trained specially for desert warfare. They are the men of steel, whose physical and mental toughness is beyond compare. Capt Sajjan Singh Malik joined the battalion , known for its fearless soldiers and numerous dare devil operations.

During 2004, Capt Sajjan Singh Malik’s unit was deployed in J & K for counter insurgency operations. The unit had received information about the presence of some hard core terrorists in Bandipur Tehsil of Baramulla district. Capt Malik was given the task of tracking the movement of terrorists and nabbing them. He tracked their movement for over a month before laying a trap in Gundpura village in Bandipur tehsil of Baramulla district on the night of 07 July 2004. Capt Malik launched the carefully planned operation along with his troops in the night and cordoned off the suspected area.

As the terrorists were leaving the village in the early hours the next day, his assault team launched a surprise attack on them. The terrorists retaliated and a fierce gun battle ensued thereafter. In the firefight Capt Malik personally killed two terrorists chasing them in the narrow by-lanes of the village. However during the exchange of fire Capt Malik received three bullet injuries. Despite getting wounded he continued motivating his troops to surround and prevent the third terrorist from escaping. He kept the pressure on and closed in on the third terrorist, killing him at close quarters. Capt Malik however, succumbed to his injuries and was martyred. Capt Malik was a committed soldier and a fine officer who laid down his life in the service of the nation.

The Citation for the Kirti Chakra awarded to him reads:-

Captain Sajjan Singh Malik after skillfully tracking the movement of a group of terrorists for a month, laid a trap in Gundpura village in Baramulla district on the night of July 7. As the terrorists were leaving the village in the early hours the next day, he sprang the ambush. In the firefight he personally killed two terrorists in the narrow by-lanes of the village but in the process received three bullet injuries. Ignoring his injuries he motivated his troops to surround and prevent the third terrorist from escaping. Lobbing grenades and with tremendous effort he closed in on the third terrorist, killing him at close quarters. He, however, succumbed to his injuries, sacrificing his life in the best traditions of the Indian Army.