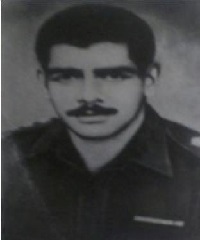 Captain Rudolph David Rosario was born on 3rd February 1936 in Lallaguda city of Andhra Pradesh. He was commissioned into 4 Sikh LI of the famed Sikh light infantry regiment of the Army known for its valiant soldiers and numerous battle honours. He was commissioned as a second lieutenant on 9th December 1956 at the age of twenty years. By 1962, when the war with China broke out, Capt Rosario had put in about 6 years of service and evolved into a fine officer and committed soldier.

During the war with China in 1962 Captain RD Rosario was leading a company of a Sikh Light Infantry while his unit was deployed at the Chinese border in the Tawang area. To have the tactical advantage it was important for his unit to assess the condition of a bridge across the river Tawang Chu. On 30 October 1962, he undertook a patrol to find out the condition of the bridge and also to assess whether the enemy was making any attempt to reconstruct it. Captain Rosario proceeded towards the river with a section of his company, however on reaching village Jang, the section came under fire from enemy mortars.

Captain Rosario realized the danger of involving all the members of the patrol in the task and asked his troops to take positions for any eventualities and moved forward alone towards the bridge. As he approached 500 yards short of the bridge, the enemy opened a heavy volume of medium machine guns and small arms from the bridge. However, Captain Rosario continued crawling towards the bridge and reached about 150 yards off the bridge which helped him to collect the vital information. He was unmindful of continuous heavy enemy mortar machine gun and small arms fire for over thirty minutes and doggedly pursued his task.

Captain Rosario was given the nation’s third-highest gallantry award “Vir Chakra”, for his exceptional courage, and supreme sacrifice during the war.

On 30th October 1962, Capt RD Rosario, commanding a company of a Sikh Light Infantry Battalion at a bridge on the Sela-Jang Road took out a patrol to find out the condition of the bridge across river Tawang Chu and whether the enemy was making any attempts to reconstruct it. The patrol came under mortar fire. Realizing the danger to his men he deployed the patrol and moved forward alone towards the bridge. As he approached within 500 yards of the bridge the enemy opened a heavy volume of medium machine guns and small fire from the far bank of the river. Undaunted, Capt Rosario crawled forward about one hundred and fifty yards from the bridge and collect vital information. In this operation, Capt Rosario remained continuously under heavy enemy mortar, machine gun, and small arms fire for over thirty minutes. In subsequent operations, Capt Rosario fought gallantly at Sela. Later, while withdrawing he brought out one officer and six of his men but himself died from injuries sustained during the action.

Capt Rosario displayed exemplary courage leadership and devotion to duty in the best tradition of our Army.