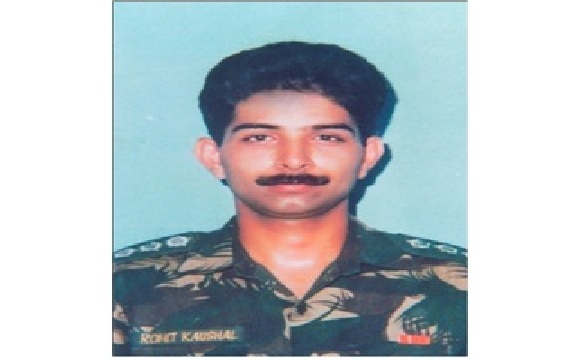 Captain Rohit Kaushal, was born on 5th August 1968 at Jalauli village of Panchkula district in Haryana. The only son of Smt Veena Kaushal and Shri S.S. Kaushal, a former Director of Education, Haryana, Capt Rohit had his entire education in Chandigarh right from nursery class to graduation. He was not only a brilliant student but was an all-rounder endowed with multiple talents. He had keen interest in diverse fields and excelled in singing and painting too. He was affable and endeared himself to his friends, colleagues as well as superiors. He nursed the idea of joining the Army since his younger days and kept pursuing his dream. Eventually he got selected to join the Army through the Combined Defence Services Examination.

After one and a half year of training at IMA, Dehradun, he was commissioned on 9th June 1990 at the age of 22 years. He was commissioned into 18 Punjab Battalion of the Punjab Regiment, an infantry Regiment well known for its intrepid soldiers and a glorious history of battle exploits. After serving for few years with his parent unit, he was later deputed to 12 Rashtriya rifles battalion deployed in J &K for counter-insurgency operations. Capt Rohit wedding had been fixed for 27th November 1995, and all preparations for the event had been made by the family members. But unfortunately the destiny had something else in store for him. mind. Capt Rohit was considered to be a highly intelligent officer. He was incredibly brave and fearless. His extraordinary courage and indomitable enthusiasm to fight insurgency made him raid the hide-outs of militants a number of times. The militants were after his life, keeping him on their hit-list. He had escaped two attempts on his life.

During 1995, Capt Rohit Kaushal’s unit 12 RR was deployed in Doda District of J&K. The AOR(Area of Responsibility) of the unit was was a hotbed of militant activity and the troops were engaged in operations against the militants on a regular basis. Capt Rohit in a short span of time had undertaken a number of counter-insurgency operations and his superior soldierly skills were highly appreciated. His fearless operations against the militants had antagonized them and he was considered to be on their hit list. This was proven by the fact that attempts were made on his life two times. Capt Rohit was tasked for one more such operation on 11 Nov 1995 based on the information received from the intelligence sources.

Capt Rohit and his men reached the suspected area of Mulwanu in Doda district and launched the search and cordon operation. Soon the troops made contact with the militants who opened fire at them on being challenged. Capt Rohit tightened the cordon to block the escape routes of the militants and attacked aggressively. In the following fierce gun-battle Capt Rohit received gun shots in his chest and neck. Though bleeding profusely, he continued firing and fatally wounded two militants before collapsing. He was rushed to a nearby hospital for medical attention but succumbed to his injuries later. Capt Rohit  was a valiant soldier and a fine officer who led from the front like a true military leader. He laid down his life in the service of the nation and would always be remembered for his exceptional courage and steadfast devotion to his duty. Capt Rohit  was given the gallantry, “Sena Medal” for his outstanding example of leadership, courage and the supreme sacrifice.

The news of the glorious, though tragic death, reached Capt Rohit’s family on the morning of 11th November 1995. His mother, who is a devotee of Lord Krishna, had left for Vrindavan to pray and seek Krishna’s blessings for her son’s marriage and happy life. She had to be brought back from Ambala for receiving her son’s dead body, which arrived on 12th morning. Capt Rohit’s family members though completely heart-broken, shocked and stunned, gave him a red carpet welcome, realizing that he had made a supreme sacrifice for his motherland, for a national cause and so attained glory and immortality. They received him shouting, “Jai hind” and decorated his pathway with flowers. As long as his body remained with the family, before his journey to the cremation ground, there was incessant chanting of the ‘Mahamantra’, amidst weeping and wailing. The Mahamantra echoed even when the pyre was lit and continued till the body was reduced to ashes. He was cremated with full military honours at Chandigarh.