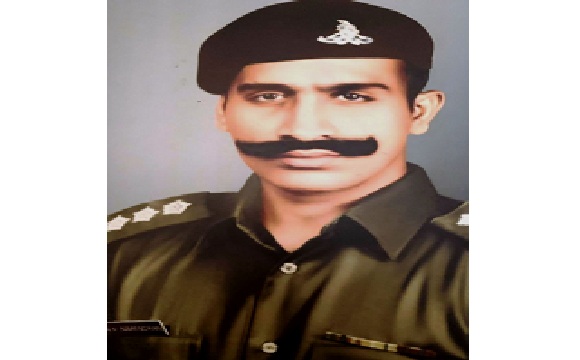 Captain RM Narendran hailed from Kozhikode district of Kerala and was born on 08 May 1943. Son of Shri KPR Menon, former DIG of police and Smt Leela Menon, Capt RM Narendran nursed the idea of donning the Army uniform since his younger days. He studied from Malabar Christian College in Kozhikode and while in college continued to follow his dream. Eventually, he joined the  Army in the year 1960 at the age of 17 years. He was commissioned into 161 Field Regiment of the Regiment of Artillery, the second largest arm of the Indian army.

He soon evolved into a committed soldier and a fine officer with superior field-craft skills. Besides being a tough soldier he was very affable and caring which endeared him to his peers and subordinates as well. After serving for a few years Capt RM Narendran got married to Ms Shyamala Nair on 28 Dec 1967 and the couple had two sons Ramprakash Narendran & Viswanath Narendran. By 1971, he had put in around 10 years of service and had served in varous operational areas. Besides being a deep rooted soldier, he had keen interest in athletics and won many laurels for his unit in various competitions.

During 1971 war, Capt RM Narendran's unit 161 Fd Regt was deployed in the western sector under the operational control of 54 Infantry Division commanded by Major General WAG Pinto. The Regiment played a crucial role in the 'Battle of Basantar'. Starting on December 4 the battle lasted for 12 long days, and was one of the hardest fought battles of the war. The objective of the battle was to bridge the Basantar River and secure the vital Shakargarh sector. It was spearheaded by I Corps, which had 3 infantry divisions, 2 Armoured Brigades, 2 Independent Artillery Brigades and one Engineer Brigade. On 3/4th Dec 1971, the Indian army crossed the international border led by 47 Inf Brigade. Two more Brigades, 74 and 91 followed suit making the attack front formidably large. The task given to the 54 Inf Div was to advance in the area between Degh Nadi and Karir Nadi and capture Zaffarwal – Dhamtalline and then be prepared for the capture of Deoli and Mirzapur.

Capt RM Narendran's unit 161 Fd Regt was part of the Division Artillery along with 69, 162 Fd Regt, 44 Light and 70 Med Regt, commanded by Brig Avtar Singh. The operations of 54 Infantry Division commenced simultaneously with those of 39 Infantry Division and the border outposts were captured on the night of 05/06 December. By 07 Dec 47 Inf Bde had extended the bridge head including Dadua Kalan, Bri-Dharman and Ghamrola. During the next three days, 54 Inf Div consolidated in these areas. The next objective of the Division was Chakra- Dehlra, an area of well fortified Pak defences. However supported by Capt RM Narendran and his comrades of Artillery Regiments, the objective was achieved by 12 Dec.  The impact of the Artillery was such that the enemy left behind 6 tanks in running condition.
Capt RM Narendran's unit 161 Fd Regt was providing direct support to the operations of 47 Inf Bde. Along with 74 Inf Bde operations at Chakra and Dehlra, the other infantry Brigade of the Division, 91 Inf Bde launched attack to capture Laisar Kalan on 13 Dec. A total of 9 field and six medium batteries of the Artillery supported the attack. As 74 and 91 Inf Bde were advancing towards their objectives, 47 Inf Bde was consolidating its positions. At this juncture, Capt RM Narendran and his unit personnel were providing the required crucial support. However on 14 Dec, during the fierce exchange of fire Capt RM Narendran got severely injured. He later succumbed to his injuries and was martyred. In the crucial 'Battle of Basantar' besides Capt RM Narendran, three other soldiers of 161 Fd Regt made the supreme sacrifice which included Sub Ranjit Singh, Naik GG Krishna Pillai and Gunner PP Nair.
Capt RM Narendran and his comrades of 161 Fd Regt received praise even by the enemy soldiers for their bravery and commitment. In a meeting with the Commanding Officer of 161 Fd Regt after the cease fire, Lt Col Maqsood and Major Rizvi of Pakistani Artillery said, "Hats off to your Artillery Sir. This was the battle of the Artillery and you have won it". Capt RM Narendran was a gallant soldier and gritty officer, who displayed commendable courage, professional competence and devotion to duty in keeping with the finest tradition of Indian Army.
Capt RM Narendran is survived by his son Shri Viswanath Narendran.