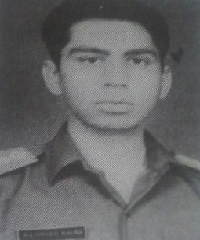 Capt Ravinder Kaura hailed from Jagraon village of Ludhiana district in Punjab. Son of late Shri L D Khaura, Capt Ravinder was born on 28 Sep 1946 and grew up to be a young man with a strong desire to serve in the Armed Forces. Eventually, he joined army on 6th Aug 1967at the age of 21 years. He was commissioned into 39 Medium Regiment of the Regiment of Artillery, the important combat support arm of Indian Army, known for its field guns , howitzers and other heavy weaponry. Capt Ravinder had put in barely 4 years of service, when he got involved in the thick of operations as border tension arose with Pakistan in 1971.

During Indo- Pak 1971 war Capt Ravinder Kaura’s unit 39 Med Regt was deployed on the western border. The unit was deployed in Chhamb sector under the operational control of 10 Infantry Division. The Battle of Chamb of 1971 war was an epic feat of arms and stood out as one of the most instructive battles of all three Indo-Pak wars in terms of operational strategy, small unit actions and handling of armour. In that sector 191 Brigade with its four infantry battalions was tasked to defend the Indian positions, three covered the Cease Fire Line (CFL) from the Manawar village-Jhanda area, in the South, to Mandiala, in the North. A massive artillery bombardment of border posts began shortly before 2100 hours. The attack mounted by Pakistan’s 23 Division, came all along the CFL.

Capt Ravinder Kaura was functioning as a Forward Observation officer (FOO) in a defended locality in the Chhamb Sector. On the 3rd/ 4th December 1971, the enemy attacked this position in strength on a number of occasions. These attacks were supported by intense and accurate artillery fire. Undeterred by the heavy shelling and unmindful of his personal safety, Capt Ravinder repeatedly exposed himself to danger in order to bring down accurate artillery fire on the enemy. He inspired and encouraged the men to bring down effective artillery fire on enemy vital points. His accurate artillery fire succeeded in thwarting the enemy attempts to dominate Indian positions. However while doing so, Capt Ravinder Kaura was hit by an enemy shell and got seriously injured. Though he was declared KIA (Killed in Action), he is presumed to have been taken over as a POW (Prisoner of War) and his name appears in the list of 'Missing 54'.

India believes the 54 soldiers went missing in action and are held in Pakistani prisons. But more than four decades after they disappeared, there's no clarity over their numbers and fate. The parents of Capt Ravinder Kaura had reconciled with his death but in 1989 or so one petty smuggler Mukhtiar Singh was released from Pakistani jail who in an interview with local papers mentioned that there were many inmates including Capt Kaura in the jail he was lodged in. Capt Ravinder Kaura was given the gallantry award, “Vir Chakra” for his courageous action, leadership and devotion to duty.

Captain Ravinder Kaura of the Regiment of Artillery was an observation post officer in a defended locality in the Chhamb Sector. On the 3rd/ 4th December 1971, the enemy attacked this position in strength on a number of occasions. These attacks were supported by intense and accurate artillery fire. Undeterred by the heavy shelling and unmindful of his personal safety. He repeatedly exposed to himself to danger in order to bring down accurate artillery fire on the enemy. He inspired and encouraged the men to hold on to the position continued to bring down effective artillery fire, breaking up enemy attacks till he was killed by an enemy shell.

In this action, Captain Ravinder Kaura displayed gallantry, determination and leadership of a high order.