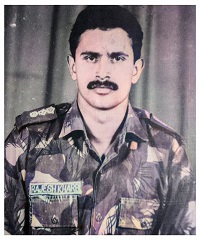 Capt Rajesh Kharb originally hailed from Haryana, and was born in Delhi on 12th April 1966. He grew up with a passion to join the Defence Forces and serve his motherland. At the age of 18 years, he completed his school education and got selected to join the prestigious NDA  in the year 1984. He excelled in all spheres of training at NDA and subsequently at IMA Dehradun.

He got commissioned as a second lieutenant in 1987 at the age of 22 years. He was commissioned into 3 Grenadiers of the Grenadiers Regiment, an infantry regiment with a rich history of gallantry and battle honours. The Grenadiers have the unique and distinct honour of getting the most number of Param Vir Chakras, India’s highest medal for gallantry, among all the Indian Army’s Infantry Regiments.

By the year 1995, Capt Rajesh Kharb had put in around seven years of service and developed into a gritty soldier and fine officer. A soldier at heart, he was very affable, compassionate and cheerful as well which made him quite popular amongst his troops. He was an excellent sportsmen and performed exceedingly well in all Army courses. He led his life with grace, honour and dignity which endeared him to all who came in contact with him.

During 1995, Capt Rajesh Kharb was serving as as GSO(3) Int ( General Staff Officer Grade(3) Int) with the Infantry Brigade located at Along, headquarter of the West Siang district of Arunachal Pradesh. Prior to this posting he was serving with his Battalion in Kupwara in the trouble torn J&K. Despite getting posted from another field area with very demanding counter-insurgency operations, he graciously accepted the next assignment with equally challenging work environment. On 06th June, 1995 Capt Rajesh Kharb was tasked to undertake reconnaissance of the area under the unit's AOR (Area of Responsibility) for operations reasons. As the unit's AOR was primarily mountainous and inaccessible in many pockets, the reconnaissance was planned to be conducted by air.  Consequently a MI-8 Helicopter was requisitioned for the mission which was planned to take off on 06 June.

Capt Rajesh Kharb boarded the designated MI-8 Helicopter which took off from Walong as planned after completing the preparatory checks. However after flying for sometime, the Helicopter developed serious technical snag and despite efforts of the pilots became uncontrollable. Eventually the MI-8 Helicopter crashed near Bello village in Yomcha subdivision of West Siang district of Arunachal Pradesh. There were no survivors and all the all seven personnel on board lost their lives. Thus a the life of a bright and exemplary young officer was lost in a tragic manner. Capt Rajesh Kharb was a committed soldier and a fine officer who laid down his life at the age of 29 years in the line of his duty.