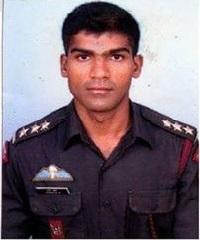 Capt R Harshan was born on 15 April 1980 at Manacaud in Thiruvananthapuram in Kerala to K Radhakrishnan Nair and Chitrambika. He completed his schooling at Sainik School Kazhakootam. A multi-faceted student, he was equally adept at studies, sports, and extracurricular activities. While he played all sports, he captained the school’s Volleyball & Basketball teams. He is especially remembered by school mates for his notable performance as ‘Brutus’ in the play Julius Caesar, during the Annual Day function. He was a born leader and chosen as the School Captain in his final year,  also earning the ‘Best All Round Cadet’ award that year. A voracious reader and a good orator, he devoured books on war and dreamt of being a paratrooper.

After training at NDA & IMA, he achieved his dream of becoming a paratrooper when, he was commissioned into the elite ‘Red Devils’, the 2nd battalion of the Parachute Regiment of the Indian Army. He proved his mettle by performing very well during probation and subsequently was nominated for special weapons training in Israel.

Capt R Harshan was posted to Kashmir in 2006 and his unit was operating in the terrorist-infested area of Baramulla in J & K. On 7th March 2007 while leading his team during a patrol, he observed some suspicious movement. He immediately ordered his troops to take up positions to deal with any eventuality. He soon spotted one terrorist and in a courageous move crawled in the underbrush skillfully and shot him. The other terrorist fired at Capt Harshan, but he unmindful of his safety charged at him and shot him down, killing both single-handedly.

On 19 Mar 2007, Capt Harshan’s unit had received information from the intelligence sources about the presence of terrorists in a village in Baramulla district. It was decided to launch an operation in the night to flush out the terrorists. In the early morning of 20th March, Captain Harshan along with his troops cordoned off the area surrounding the suspected house.  At about 3:50 AM, four terrorists holed up inside the house, tried to break free from the cordon by rushing out and firing indiscriminately. Captain Harshan in a swift and daring move shot dead the leader of the terrorist group, but in the exchange of fire, he received a bullet on his thigh. In total disregard to his injury, he battled on and killed one more terrorist. This time, however, he was shot in the neck and despite that, he lobbed a grenade and injured the third terrorist. However, Captain Harshan later succumbed to his injuries and was martyred, before he could see his team kill the remaining two terrorists. Captain Harshan led from the front like a true military leader and laid down his life in the service of the nation.

Captain Harshan was given the nation’s highest peacetime gallantry award “Ashok Chakra” for his exceptional courage, fighting spirit and supreme sacrifice. He became the youngest ever recipient of the prestigious gallantry award in the Indian military history.

Lt Colonel S Srivastava, second in command of Capt Harshan’s battalion paying tributes to him said “I had known him all the four years that he had been in 2 Para. I had not met another officer like him in any Special Forces formation. So quiet and so soft spoken that we often have to really proud him to speak up, yet so good at his job that he was handling the entire training of his formation by himself,”. He was completely committed, almost obsessed with his missions. He had led so many anti-terrorist strikes before. He was a lot more than a colleague to me.”