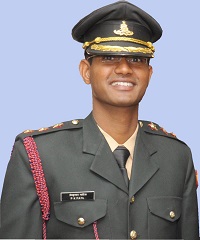 Captain Prem Kumar Patil hailed from Maharashtra but grew up in the state of Gujarat. Son of Mr. Krishna Patil and Mrs. Radha Krishna Patil. Capt Prem Kumar had two brothers, Ashish and Manish. Capt Prem Kumar did his schooling in Vapi and went on to do his graduation and received a Bachelor of Science degree from Vallabh Vidyanagar in Gujarat. Capt  Patil joined NCC during his student days and that motivated him to join the Indian Army.

After his graduation, Capt Prem Kumar cleared the Combined Defence Services Exam and was selected to join the Army. He was commissioned into 80 Field Regt of the Regiment of Artillery. During his service from 2009 to 2014, Capt Prem Kumar was posted at Gangtok and Jodhpur, before being sent on deputation to 36 RR unit in J & K area.

During 2015, Capt Prem Kumar was serving with 36 RR battalion, deployed in Gurez sector of J & K for counter-insurgency operations. In August 2015, there were army intelligence reports of suspicious movements in the area of Gurez sector, situated near the Line of Control. Consequently, on 7th August 2015, a ‘Seek And Destroy Operation’ (SADO) was planned by the security forces in the Gurez sector. The operation was launched by the troops of 36 RR unit and Capt Prem Kumar was tasked to lead that operation.

Capt Prem Kumar swung into action along with his troops and reached the suspected area. Soon the troops spotted the unusual movement and moved forward to make contact. On being challenged the militants fired at the troops triggering a gun battle thereafter. During the operation, Capt Prem killed two terrorists and ordered his troops to continue searching for more terrorists hiding in the forest area. Meanwhile, there was continuous cross-border firing by Pakistani troops to provide cover to the infiltrating militants. But Capt Prem Kumar was undeterred and kept up the pressure on the militants by chasing them aggressively.

However as Capt Prem Kumar was chasing the militants and was rolling down a steep slope of 80 degrees, he lost control and fell down into the river Nausheranar flowing about 280 feet below and sustained serious injuries. He was rushed to a nearby hospital for medical attention but he later succumbed to his injuries. Capt Prem Kumar was a valiant soldier and a fine officer who led from the front like a true military leader. He laid down his life in the service of the nation and would always be remembered for his exceptional courage and steadfast devotion to his duty.