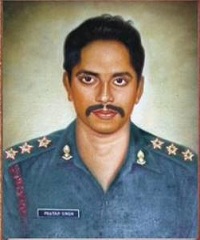 Capt Pratap Singh, son of Capt Khazan Singh, was born on 17 Jan 1960 in Basai Darapur New Delhi. He did his initial study from Sherwood college Nainital  and later  graduated in English literature from Hansraj College Delhi before joining the India Army. His father had fought in the second world war and subsequent operation of the Indian Army and had won many medals. His two elder brothers also served in the Armed forces, while one brother joined Indian Air Force, the other brother went on to command an AD regiment of Army. Sadly, his eldest brother in the Air Force was killed in an air crash while flying Jaguar aircraft.
Following his family tradition, Capt Pratap Singh joined the Army and was commissioned into the regiment of artillery on 27th August 1983. After serving with his unit, 75 Med Regt for a couple of years, Capt Pratap Singh was posted to Siachen area which had become very active and volatile after skirmishes with Pakistani forces in 1987.
Operation Meghdoot : 26 May 1988
In 1988 Capt  Pratap Singh was posted at Sonam outpost in Siachen area as an Observation Post Officer. Soon after he was called upon to defend the Bana post which is considered strategically very important  for the defences in that area the adversary made repeated attempts to retake a key post vital for the defence of Siachen. However these attempts were foiled by our vigilant forces. Again on 9th May 1988,the enemy commando group made a very vicious attack to retake the post using ropes and ladder system on the ice wall below the post for the purpose. This attack was successfully beaten back. The ropes and ladder system fixed by the adversary, however, remained in position, making it possible for them to use it again in their fresh attempts to take the post. It was imperative that the fixed ropes were cut and the ladder unfixed to prevent fresh attacks.
On 18 May 1988, Second Lieutenant Ashok Chaudhry was able to reach and cut two of the four ropes. On 26 May 1988, it was decided to cut the remaining two fixed ropes and unfix the ladder. Capt Pratap Singh undertook this mission with the help of a jawan descending down the ice wall. On reaching the location, Capt Pratap Singh found a large quantity of ammunition and grenades lying at the head of the ropes. As he was examining them, a grenade booby trap exploded, severely wounding him in his right arm and chest. Despite being severely wounded, the brave officer crawled forward to the fixed ropes and cut them with his knife. He then un-fixed the ladder system and let it fall down the ice wall. The gallant officer inched back to his own rope to return to the post but collapsed and succumbed to his injuries. Capt Pratap Singh, thus displayed conspicuous gallantry in eliminating a grave threat to a key post of Siachen at the cost of his life.
Capt Pratap Singh was given the nation’s second highest gallantry award “Maha Vir Chakra” for his conspicuous gallantry, indomitable spirit and supreme sacrifice.

The citation for “Maha Vir Chakra” awarded to him reads :

Captain Pratap Singh was deployed as an observation post officer Siachen area in April 1985. The adversary made repeated attempts to retake a key post vital for our defences of Siachen, without success. Their last attempt to take a post was on 9th May, 1988, when they fixed four ropes and a ladder-system on the ice-wall below the post for the purposes. This attack was successfully beaten back by our forces. The ropes and the ladder-system fixed by the adversary, however, remained in position, making it possible for them to use it again in their fresh attempts to take the post. It was imperative that the fixed ropes were cut and the ladder unfixed to prevent fresh attempts. On the 18th May, 1988, Second-Lieutenant Ashok Choudhary was able to reach and cut four of the ropes.

On the 26th May, 1988, it was decided to cut the remaining two ropes and unfix the ladder. Captain Pratap Singh undertook this mission with the help of a jawan, descending the ice wall. On reaching the location, Captain Pratap Singh found a large quantity of ammunition and grenades lying at the head of the ropes. While examining the same, a grenade booby-trapped him, severely wounding his right arm and chest. Despite being badly wounded the brave officer crawled forward to the fixed ropes and cut them with his knife. Then he unfixed the ladder system and let it fall down the ice wall. Then the gallant officer inched back to his own rope to come up the ice wall to return to the post, but collapsed due to his severe wounds and made the supreme sacrifice of his life for the nation.

Captain Pratap Singh thus displayed conspicuous gallantry in eliminating a great threat to a key post of our vital defence of Siachen Glacier at the cost of his life.

In August 1987, our regiment, 75 Medium Regiment was about to move out from Delhi to the Kashmir Valley. Captain Pratap Singh, being posted on compassionate grounds and having spent two years, the time had come for return to his parent regiment as per the norms in the Army. Captain Desh Raj and I moved with the advance party to the Kashmir Valley. Captain Pratap called me up to say that he had walked up to our Commanding Officer (CO) Colonel Mahaveer Singh and had requested him that he would like to continue with our regiment and wanted his parent regiment to be changed to 75 Medium. He also said that he had enjoyed the two years he served with our regiment and that he had developed a special attachment to the soldiers and officers. Colonel Mahaveer accepted Captain Pratap’s request and contacted the Army Headquarters and thus Captain Pratap’s parent regiment was changed to 75 Medium Regiment and he moved with the regiment to the Kashmir Valley in November 1987.

Our regiment was to induct its first Observation Post team in Siachen Glacier in March 1988. The choice was between Captain Pratap and me. Colonel Mahaveer had briefed us in December 1987 to select our team and also to prepare and train for the impending task. At that time the Brigade Headquarters wanted an officer to be attached with them as an administrative staff officer for six months and so Colonel Mahaveer said that one of us will go to the Siachen Glacier and the other to the Brigade Headquarters. Siachen Glacier, one of the world’s largest glaciers, is situated North of Leh. This land, the world’s highest battleground located at about 5,750 m (18,875 ft), will test human endurance against the rigours of high altitude and turbulent terrain. Ever since Indian forces occupied the Siachen Glacier in 1984, both India and Pakistan have fought intermittent artillery duels and many attempts were made by Pakistan to capture the territory. In winter, temperatures here can plummet to minus 70 degrees Celsius and winds of up to 160 km an hour can come without warning. Over the past several years, soldiers have seen amputation of limbs lost to frostbite and death by pulmonary edema. Many soldiers have lost their lives to avalanches or falling into crevasses during patrols. According to some estimates, 90% of the casualties in Siachen have been due to weather and altitude, rather than actual fighting.

Captain Pratap, a Short-Service officer, commissioned in September 1983, had not opted for a permanent commission and had decided to take release from the army after serving five years. Armed with his application for release from the army, Captain Pratap walked into Colonel Mahaveer’s office in January 1989 and told him that he wanted release from the army and hence wanted to participate in an operation prior to his release. He managed to convince Colonel Mahaveer that he would take on the duties in the Siachen Glacier in March. Thus Captain Pratap started with his training for the operations and I moved into the Brigade Headquarters. On 27 May 1988, Brigadier DS Chowdhary, our Brigade Commander called me to his office to break the news that Captain Pratap had laid down his life while performing his duties. Immediately I called up Colonel Mahaveer to break the sad news and he did not utter a word. I rushed to the regiment and straight went into Colonel Mahveer’s office and that was the only time I ever saw tears in his eyes.

On 26 January 1989, the nation recognized the supreme sacrifice made by Captain Pratap Singh and decorated him with Maha Vir Chakra (MVC). After over 25 years, Captain Pratap Singh, MVC, continues to be my hero and always has a special place in my heart.