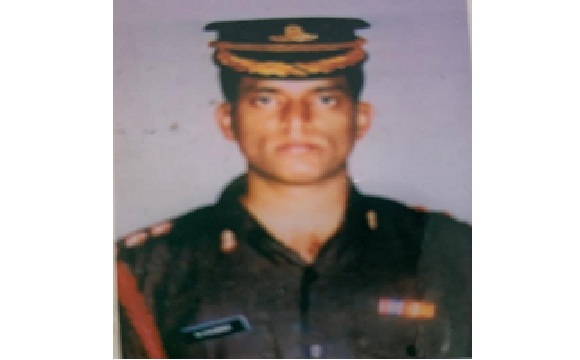 Capt Rapolu Veera Raja Reddy hailed from Hyderabad and was born on 22 September 1977. Son of Dr R Kondal Reddy, he initially studied from Takshashila Public school and later completed his Class XII from Little Flower Junior college, Hyderabad. Though he did not come from a military background, he had inclination towards the Armed Forces since his younger days.  Following his passion, consequently, he got selected for the prestigious NDA after finishing school. He joined the NDA course in the year 1995 and became part of the Foxtrot Squadron. He excelled in varous aspects of training in NDA and passed out with flying colours.

He later went to  IMA Dehradun for further training and was commissioned as a Lieutenant in Dec 1999 at the age of 22 years. He got commissioned into 69 Fd Regt of the Regiment of Artillery, an important combat support arm of Indian Army, well known for its booming filed guns, howitzers and other heavy weaponry. He had had an upbringing, where a lot of emphasis was given to cultural an moral values. He had deep understanding of varous religious texts Like Ramayan, Mahabharat and Vedas, which influenced his thinking and shaped his character. He grew up into a good human being with strong moral fiber.

After completing his training as a young Lieutenant he got posted to his unit 69 Fd Regt and moved to J&K. He soon evolved into a committed soldier and a fine officer with superior field-craft skills. Besides being a committed soldier he was very affable and caring which endeared him to his peers and subordinates as well.  As the area of his unit’s operation was very volatile and prone to infiltration by militants, the unit had to maintain a strict vigil at all times and deployed armed patrols with regular frequency.  He soon was promoted to the rank of Capt and took part in various operations. He also conducted training of village defence committee members in drills and weapon firing. He developed good liaison with civilian authorities and created goodwill among civilian population, which was very vital for conducting successful operations in Kashmir.

During July 2002, Capt R Veera Raja Reddy's unit 69 Fd Regt was deployed in Rajouri district of J&K as part of "Operation Parakram". The unit troops were engaged in counter-insurgency operations on a regular basis as its AOR (Area of Responsibility) was affected by active militancy. On 31 July 2002, the security forces received information from the intelligence sources about the presence of militants in a village in Rajouri district, falling under the AOR of the unit. It was decided to launch a joint operation along with J&K Police to nab the hardcore militants. Capt Reddy was part of the joint team which also had elements of nearby infantry units.

Capt Reddy and his comrades reached the area and launched the operation. The militants were hiding in a residential building in the suspected area, which was cordoned off in a well-planned move. On being challenged the militants opened fire at the troops and a fierce gun battle ensued thereafter. Capt Reddy leading the operation, tactically moved his troops to close all escape routes for the militants and moved closer to the house. The militants in sheer desperation resorted to indiscriminate and heavy firing against the troops. During the fierce exchange of fire, Capt Reddy received gun shots and was injured grievously. Undeterred, Capt Reddy continued pinning down the terrorists, to ensure safe evacuation of the civilians in the vicinity of that house. However, Capt Reddy soon succumbed to his injuries and was martyred. Eventually the operation was successful with 4 militants having been killed and a substantial amount of arms and ammunition was recovered.

Capt Rapolu Veera Raja Reddy was a gallant soldier and a gritty officer, who laid down his life at the age of 25 years in the service of the nation.