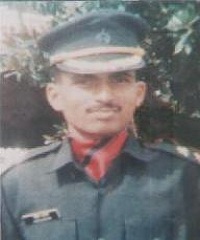 Captain Nithin Chavan was born on 4th January 1977 and hailed from Pune in Maharashtra. Son of Shri Prakash Chavan and Smt Sunanda Chavan, Capt Nitin had a sister named Smita. Capt Chavan did his schooling from St Joseph’s till class X and later studied in Fergusson College, Pune till 1994.

As he always wanted to join the Armed Forces, he continued to pursue his dream and eventually after completing his schooling got selected to join the NDA in 1994. He  graduated from IMA and was commissioned as a lieutenant on 13 Jun 1998 at the age of 21 years. He was commissioned into 115 Engr Regt of the Corps of Engineers, one of the oldest arms of Indian Army. Capt Nitin was posted to the J & K area after passing out as his first assignment and got an opportunity to take part in challenging operations in the early part of his service career.

After a chase Capt Nitin Chavan and his troops could spot the militants in a maize field, who fired at them on being challenged. A fierce gun battle ensued thereafter which continued for an hour. Capt Nitin Chavan soon spotted two militants who were firing at his troops and realized the need to neutralize them at the earliest. Capt Nitin Chavan decided to take on them and moved swiftly to pounce on them. The militants were taken aback by his dare devil action and started to fire indiscriminately, giving time to the troops to reorganize themselves. However during this exchange of fire Capt Nitin Chavan got seriously injured and later succumbed to his injuries. Later the reinforcement arrived and the operation continued to eliminate the terrorists. Capt Nitin Chavan like a true leader led from the front and was martyred in the highest traditions of the Army. Capt Nitin Chavan was a committed soldier and a fine officer who laid down his life in the service of the nation.