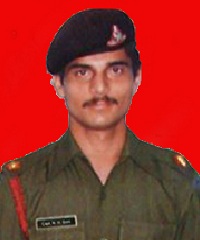 Captain Nilesh Soni was born on July 13th, 1962, in Viramgam near Ahmadabad in Gujarat. Son of Mr Harjivenbhai Chatrabhuji Soni and Mrs Kalavatiben Soni, Capt Nilesh completed his primary education in Shishuvihar Balmandir, Paldi in Ahmedabad. Later he joined CN Vidyalay in Ambawadi, Ahmadabad where he studied till class V. Afterwards he joined Sainik School, Balachadi near Jamnagar in Gujarat, where he completed his class XII. At Sainik School Balachadi, he got motivated to serve in the Armed Forces and passed his Nation Defence Academy Examination.

After his training, on June 9th, 1984, he was commissioned as Second Lieutenant into 62 Field regiment in the Regiment of Artillery. After completing of one year of service at Devalali in Nasik, he was promoted as Lieutenant and later moved to Kargil Area along with his unit. Capt Nilesh Soni was then posted to Siachen Glacier in December 1986, the world’s highest battlefield where the temperature falls to -45 to -55 degrees in winter months. Captain Nilesh served for three months on the forward post at about 6400 meters height.

During early 1987, Capt Nilesh Soni was serving in Siachen glacier braving the hostile weather as well as the enemy across the undefined border. Besides facing extreme weather conditions, Capt Nilesh Soni and his troops had to deal quite often with unprovoked firing from the enemy forces. On February 12th, 1987, around midnight Capt Nilesh and his soldiers detected suspicious movement in their area of control. Soon a fierce gun battle followed with a heavy exchange of fire from both sides.

The small arms fire from the enemy was accompanied by artillery shelling which prove the fact that it was a well-planned move by the enemy. The Indian forces also swung into action to give a befitting reply, however one of the enemy shells hit the mountain right behind the position of the Indian post. The heavy shelling triggered an avalanche which proved very deadly for Indian forces. Capt Nilesh Soni got buried under tons of snow and could not be rescued in time due to harsh weather and relentless enemy firing. Capt Nilesh Soni was a dedicated soldier and a fine officer who laid down his life in the service of the nation.

Mr. Jagdish Soni, brother of Capt Nilesh Soni paid tribute to his brother on his “Birth Anniversary” on 13th July 2018…

56 years ago, this day i.e. 13th July 1962 was a day of celebration for us as the family welcomed the new member – my younger brother. My family named him, “Nilesh”, meaning “The Blue God” ( Krishna). At that time my father was serving with the Government of Gujarat as a Deputy Collector and was a true nationalist. The Sino-India war of 1962 had a deep impact on him and he made up his mind to send one of his sons to the Armed forces to serve the nation.

Those days, one of my Aunts was staying in the Army Cantonment area of Ahmedabad in #Gujarat. During our frequent trips to my Aunt’s house, Nilesh would observe the soldiers practicing in open ground very intently and ask many questions about Army life. His interest slowly transformed into his determination to join the Armed Forces and my father was happy to see this transformation in Nilesh.

Nilesh’s journey towards his dream commenced with his admission to Sainik School Balachadi near Jamnagar. The foundation for his soldierly qualities was laid in the Sainik School, which were further honed, when he joined the prestigious NDA after his matriculation. Soon after his commissioning into the Regiment of Artillery, Nilesh as a young officer served at Kargil, Leh and other remote border areas of J & K for two years. In Sept 1986 Nilesh got was posted to the Siachen Glacier arguably the most inhospitable and treacherous battlefield in the world.

On 12th Feb 1987, my brother Nilesh laid down his life, fighting the enemy forces before he could turn 25. His martyrdom on the icy slopes of Siachen, froze the family too. The family received its “pride” draped in tricolor, 14 days after his martyrdom. It is said that time is a big healer but in my mother’s case the time did not succeed in doing that. Though she was married to a nationalist, as a mother she was against the idea of Nilesh joining the Army. Her fears had come true and she would often question my father about his decision to send Nilesh to the Armed Forces. My father at times felt torn, on one side with the irreparable loss of his son and on the other, his wife’s questions for which he had no answer.

My parents lived the last days of their lives remembering Nilesh and seldom enjoyed festivals and functions. As parents they were sad but I knew that deep down their hearts, they were really proud of their son, who had made the supreme sacrifice for the nation. My parents would visit the, “Nilesh Shaheed Smarak” constructed by the family in Ahmedabad on every 13 July & 12 Feb, (birth anniversary & day of martyrdom of Nilesh) and I could feel the sense of pride in them.

I want to assure my brother Capt Nilesh Soni, now residing among the stars above that our parents were indeed proud of him as long as they lived and so am I as long as I would live……….

Nilesh, my brother, you remain my hero.