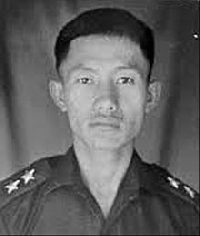 Captain Neikezhakuo Kenguruse was born on 15 July 1974 and hailed from Nerhema village in Kohima district of Nagaland. Son of Neisielie Kenguruse, Capt Kenguruse had two brothers, Ngseue Kenguruse and Atoulie Kenguruse. He did his schooling at St Xavier School in Jalukie and finished his graduation from Kohima Science College. He then served as a teacher at the Government High School in Kohima from 1994 to 1997.

Capt Kenguruse was commissioned into the Army Service Corps of Indian Army on December 12, 1998. As his first assignment, Capt Kenguruse got posted to the unit deployed in J & K area. His family would fondly call him ‘Neibu’ and in the army, he was better known as ‘Nimbu Sahab.’

In 1999, when the Kargil war started, Capt Kenguruse was a junior commander in the Rajputana Rifles battalion deployed in Drass sector. For his determination and prowess, he was made the lead commander of the Ghatak Platoon of his battalion. Only the most physically fit and motivated soldiers make it into the dreaded Ghatak platoon that makes up the first wave of Indian Army’s counterattack forces.

On the fateful night of June 28, 1999, Capt Kenguruse’s Ghatak platoon was given the responsibility of taking out a strategic machine gun post held by the enemy on a cliff face, the Black Rock. Heavy gunfire from this position had been hindering the battalion’s progress in the sector for days and it was very crucial to neutralize this enemy position. The assigned task was extremely challenging as the gun post was on a cliff with a steep gradient and the path was open to enemy artillery fire. Capt Kenguruse took up the challenge and swung into action along with his spirited troops. About seven Pakistani bunkers stood before them, and heavy artillery greeted their journey up the knife-edge cliff of the hill. As they were nearing the first bunker, a grenade was thrown at them, which injured Capt Kenguruse severely. He sustained splinter injuries in his abdomen but undeterred, he urged his men to carry on with the assault.

As the commando team scaled the cliff, they came under intense mortar and automatic fire, which caused heavy casualties. However, Capt Kenguruse leading from the front decimated the first bunker using a rocket launcher. Motivated by their leader, the commando team moved on further up the cliff. On reaching the final cliff face, they were halted by a rock wall that separated them from the enemy machine-gun post. They had to scale the wall to reach the enemy. While securing the rope enabled his men to climb over the face of the rock, Capt Kenguruse foothold was slipping due to his boots. At a height of 16,000 feet and a temperature of -10 degree Celsius, Capt Kenguruse kicked off his shoes for better grip and scaled the rock barefoot.

Then two enemy soldiers from the second bunker charged towards him and he engaged them in hand to hand combat and hacked them to death with his commando knife. As he was approaching the third bunker, a stream of bullets threw him off the cliff and he plunged down the cliff, a few hundred feet below. Capt Kenguruse single-handedly destroyed two bunkers and was responsible for neutralizing the enemy position. His act of bravery had a profound impact on his troops who got charged up to capture the enemy position and kill the enemy troops to avenge his death. The assigned mission was successful and the troops attributed their success to the unfaltering leadership and daredevil action of Capt Kenguruse. Capt Kenguruse was a committed soldier and a fine officer who led from the front like a true military leader.

Martyred at the age of 25 years, Capt Kenguruse was given the nation’s second highest gallantry award, “Maha Vir Chakra” for his raw courage, indomitable spirit and supreme sacrifice. Capt Kenguruse also went on to become the first and the only recipient of Maha Vir Chakra from the Army Service Corps(ASC).

The citation for the MVC awarded to him reads:

Captain Neikezhakuo Kenguruse was the Ghatak platoon commander during the attack on area ‘Black Rock’ in the Drass Sector on the night of 28 June 1999 during ‘Operation Vijay’. He volunteered to undertake a daring commando mission of attacking a well-sited enemy machine gun position, on a cliff face, which was heavily interfering with all the approaches to the main objective of the battalion. As the commando team scaled the cliff face, it came under intense mortar and automatic fire, which caused heavy casualties.

Captain Kenguruse sustained splinter injury in his abdomen. Bleeding profusely yet undeterred, he urged his men to carry on with the assault. On reaching the final cliff face, the commando team was halted by a sheer rock wall that separated them from the enemy machine gun post. Captain Kenguruse took off his shoes to get a good grip and scaled the rock wall carrying with him a rocket launcher, which he fired at the enemy position. Unmindful of his personal safety, he thereafter charged at the enemy position and personally killed two men with his rifle and another two with his commando knife in a hand-to-hand combat before succumbing to his injury.

By his dare devil act, Captain Neikezhakuo Kenguruse single handedly neutralized the enemy position, which had held up the battalion’s progress. He displayed conspicuous gallantry indomitable resolve, grit and determination beyond the call of duty and made the supreme sacrifice in the face of the enemy, in true traditions of the Indian Army.

Capt. Kenguruse had written a letter to his father after the Battle of Tololing. It was the last time his family heard from him. His father recalled about the letter at a function organised at his memorial on the occasion of Kargil Diwas.  An excerpt from the letter said:

“Dad, we have won the battle of Tololing and have captured many enemies’ arms and ammunition but also have lost many of my colleagues who are near and dear to me. I may not be able to return home to be a part of our family again. Even if I don’t make it, do not grieve for me because I have already decided to give my best for the nation. I request you to make a small memorial for me and do remember me.”