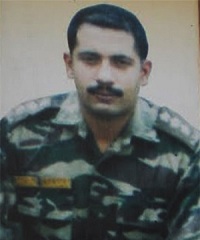 Captain Mridul Sharma was born on Feburary 24, 1978 in Hamirpur district, Himachal Pradesh. Born into a military family to Lt Col J.K. Sharma and Mrs Sudesh Sharma, Capt Mridul Sharma had a younger brother, Mukul Sharma. He did his initial education from Kendriya Vidyalaya, Hamirpur. He was a brilliant student and winner of several academic awards during his school days.

Later he followed his childhood dream and joined the Army. After completing his training at Indian Military Academy Dehradun, he was commissioned into 514 A D Regiment (SP)  on 11 Dec 1999. After serving for couple of years with his unit , he was deputed to 51 RR unit on 15 July 2002, engaged in counter-insurgency operations in J & K.

However, the terrorists who were hiding in advantageous positions attacked the troops using automatic weapons. A fierce gun battle ensued with heavy exchange of fire. The troops tactically organized themselves and retaliated forcefully thereby triggering a heavy cross fire. During the exchange of fire Capt Mridul Sharma was hit by four bullets on his chest while saving one of his companions. The grievously injured Captain and other soldiers were immediately taken to the base camp of the Army, however he could not survive and succumbed to his injuries on 1st January 2004.

Capt Mridul Sharma displayed courage and unyielding fighting spirit and laid down his life in the service of the nation. He was awarded “Sena Medal (Gallantry)” for his act of bravery and supreme sacrifice. When his mortal remains were brought to his hometown, in an emotional moment Mrs Sudesh Sharma, mother of Capt Mridul Sharma, asked the mourners not to weep as her son had made the supreme sacrifice for the nation. She, however, broke down when the coffin was lifted on way to the crematorium.

” I’m proud of my son. We send our children to defend our nation and in the process many sacrifice their lives. Mridul was among those who made the nation proud by safeguarding the Indian territory from intruders”.

Tribute paid by a blog site ‘The Himalayan Alpinist”