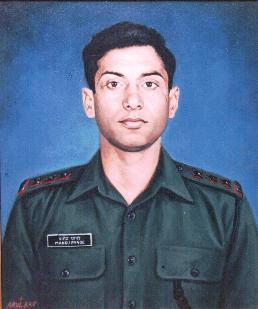 Captain Manoj Pandey, belonged to Rudha village in Kamlapur tehsil of Sitapur district in Uttar Pradesh. Son of Shri Gopi Chand Pandey and Smt Mohini Pandey,  Capt Manoj was the eldest among three brothers and a sister. Even as a child he was quite gutsy and would often amaze the elders with his acts of bravery. Despite having gutsy temperament, he was good in academics too. He studied from UP Sainik School, Lucknow wherein his dream of joining the Army took firm shape and the foundation of his future life was laid.

He had a keen interest in sports too and excelled in boxing and bodybuilding in particular. Subsequently, he got selected to join the National Defence Academy in his pursuit of realizing his dream of donning the Army uniform as an officer. He joined the 90th course of NDA and got commissioned into 1/11 Gorkha Rifles of the Indian Army, a unit known for its gallant soldiers and various heroic exploits.

Prior to his selection, during his Services Selection Board (SSB) interview, the interviewer had asked him, “Why do you want to join the Army?” He had immediately replied, “I want to win the Param Vir Chakra.” True to his words, Capt Manoj Kumar Pandey did win the country’s highest gallantry award but unfortunately did not live to receive it in person. After commissioning, his first assignment was in the Kashmir valley and thereafter he was posted to Siachen. Whilst in Siachen he received orders to move to Batalik sector, where the first intrusions by the Pakistani forces were detected and the Army was preparing for a well-coordinated retaliatory action.

By early May 1999, Pakistani forces had intruded well across the LOC, in the Mushkoh, Drass, Kaksar, and Batalik sectors. The extent of penetration across the LOC varied from 4 to 8 kms in each sector. In many vital points, neither artillery nor air power could dislodge the enemy forces, who were not in the visible range. The Indian forces had no option but to send up the soldiers for direct assaults which were slow and took a toll. One such mission was planned in the Batalik sector and 1/11 GR was assigned the task to take over Khalubar. The task was given to the ‘B’ company of 1/11 GR wherein Capt Manoj was commanding Platoon No 5. Earlier Capt Manoj was also part of the team which had captured Jaubar Top and established the first post there.

On the night of 2/3 July 1999, Capt Manoj along with his troops marched off for the Pahalwan Chowki located at a height of 19700 feet on his way to Khalubar. As the assault team moved ahead, it faced heavy and intense enemy fire from both sides of the hillock. Capt Manoj quickly moved his platoon to an advantageous position under intense enemy fire, sent one section to clear the enemy positions from the right and himself proceeded to clear the enemy positions from the left. Capt Manoj fearlessly charged ahead with the booming battle cry, “Jai Mahakali, Aayo Gorkhali” clearing two enemy bunkers. While clearing the third bunker a barrage of bullets hit him on the shoulder and legs. Undaunted and without caring for his grievous injuries, he continued to lead the assault on the fourth bunker and destroyed the same with a grenade. As he hit his target he himself got hit in the forehead with a bullet. Capt Manoj later succumbed to his injuries and was martyred at the age of 24  years.

The troops under the command of Capt Manoj gained control over six bunkers and killed eleven enemy soldiers besides getting a good stock of arms and ammunition including an air defense gun. Khalubar was eventually captured and Capt Manoj Kumar Pandey with his supreme sacrifice not set an example of unparalleled bravery but changed the course of Kargil war. Capt Manoj Kumar Pandey was given the nation’s highest gallantry award, “Param Vir Chakra” for his outstanding courage, leadership and devotion to duty.

Lieutenant Manoj Kumar Pandey, a young officer of the 1/11 Gorkha Rifles, took part in a series of boldly led attacks during Operation Vijay, forcing back the intruders with heavy losses in Batalik including the capture of Jaubar Top.

His finest hour was during the advance to Khalubar, when he was Number 5 Platoon Commander. On the night of 2/3 July 1999, as the platoon approached its final objective, it came under heavy and intense enemy fire from the surrounding heights. The officer was tasked to clear the interfering enemy positions, so as to prevent his battalion from getting day lighted, being in a vulnerable position. The officer quickly moved his platoon to an advantageous position under intense enemy fire and sent one section to clear the enemy positions from the right, while he himself proceeded to clear four other enemy positions on the left. Fearlessly assaulting the first enemy position, he killed two enemy personnel and proceeded to assault the second and destroyed it by killing two more enemy personnel. Lieutenant Manoj Kumar Pandey was injured on the shoulder and legs by enemy fire while clearing the third position. Undaunted and without caring for his grievous injury, he led the assault on the fourth position urging his men and destroyed the same with a grenade, even as he got a fatal Medium Machine Gun burst on his forehead. It is this singular daredevil act of the officer, which provided the critical firm base for the companies, which finally led to capture of Khalubar.

Lieutenant Manoj Kumar Pandey, thus, displayed most conspicuous bravery, indomitable courage, exemplary personal valour, outstanding leadership and devotion to duty of an exceptionally high order, in the face of enemy and made the supreme sacrifice in the highest traditions of the Army.