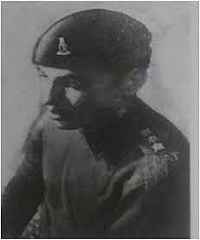 Captain Kuldip Singh Rathi hailed from Sankhol village in Bahadurgarh district of Haryana and was born on 01 Aug 1947. Son of an army veteran Captain Tareef Singh Rathi, Capt KS Rathi was eldest among four siblings. Inspired by his father, he always wanted to don the Army uniform right form his younger days. His dream eventually came true when he was commissioned on 21 Dec 1968 at the age of 21 years.

He was commissioned as a second Lieutenant into 8 Jat battalion of the Jat Regiment, an infantry Regiment well known for its intrepid soldiers and a glorious history of battle exploits. Besides being a fine soldier, he was a keen sportsman and excelled in various field games. As the war clouds were gathering in late 1971, Capt KS Rathi's unit got deployed in the western sector and he got involved in operations quite early in his service career. ,

During 1971, Capt KS Rathi’s unit 8 Jat was deployed in the Poonch sector of J&K.  As the operations were gathering pace on the eastern front, Pakistan was taking offensive actions on the western front too, to build pressure on the Indian Army. As part of this strategy, Pakistani army attacked an Indian held position in the Poonch sector on 01 Dec 1971. Capt Rathi was functioning as Adjutant of his battalion at that time and understood the gravity of the situation. He quickly analyzed the  situation and concluded that the advancing enemy had to stopped at any cost.

Capt Rathi along with his handful of men decided to assault the enemy troops on the flank and succeed in foiling the enemy attack. The enemy surprised and upset by Capt Rathi's assault decided to reorganize and attack again. The enemy reorganized for a fresh attack and brought down heavy artillery fire on the Indian position. Undeterred by the ferocity of the enemy attack, Capt Rathi  moved from trench to trench inspiring his men to repulse the attack. However during this process, he was hit by an enemy artillery shell and got seriously injured. He later succumbed to his injuries on 07 Dec 1971 and was martyred. Capt Rathi  was a valiant soldier and a gritty officer, who led from the front and laid down his life at the age of 23 years, following the highest traditions of the Indian Army.

Citation for the Vir Chakra awarded to him reads:

During the operations against Pakistan in December 1971, Captain Kuldip Singh Rathi was the adjutant of a battalion of the Jat Regiment which was holding an important position in the Poonch sector. The enemy built up heavy pressure on this position threatening to assault it. Captain Kuldip Singh Rathi took a handful of men and assaulted on the flank of the advancing enemy. By this courageous action, the attack was foiled. The enemy reorganized for a fresh attack and brought down heavy artillery fire on the position Captain Rathi moved from trench to trench inspiring his men to repulse the attack. In the process, he was hit by an enemy artillery shell, as a result of which he died.

In this action, Captain Kuldip Singh Rathi displayed gallantry leadership and devotion to duty of a high order.