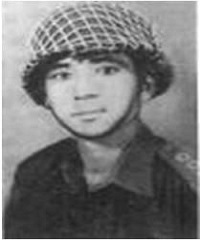 Captain Kapil Singh Thapa  was born on 2nd November 1937, in the village of Panditwari, Dehradun, Uttrakhand in the family of Mr. D.S. Thapa. On the 30th of June 1963 he was commissioned in the Jat Regiment.

During the Indo-Pak War 1965, the battalion of Jat Regiment was operated in the Lahore sector. On the night of 21st September, Captain Kapil Thapa was given the task of capturing the north western edge of Dograr village. The battalion was assigned different targets to attack companies in Dograi. The ‘D’ Company was asked to secure a foothold on the north-eastern projection of Dograi township. The company crossed the start line at 0139 hours. An enemy platoon, entrenched on the east bank of the canal, opposed its advance with intense medium machine gun fire. The enemy shelling also retarded the Indian progress.

At this stage, the depth platoon of V’ Company under Captain Thapa charged the enemy position across a minefield which was belching fire. A fierce hand-to-hand fight ensued on the bunkers. Captain Thapa himself engaged the enemy with grenades and bayonets. In spite of heavy casualties, the platoon successfully made to the objective. However, Captain Thapa laid down his life in this grim battle.

On the night of the 21st/22nd September 1965, during the battle of Dogral, Captain Kapil Thapa was given the task of capturing the north western edge of Dograr village. He personally led his men through a minefield and assaulted the enemy position. He engaged the enemy with grenades and bayonets and captured the objectives, but was himself killed in the encounter.

Captain Kapil Singh Thapa displayed conspicuous gallantry and determination in the best traditions of the Army.