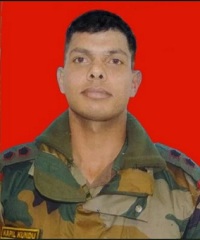 A young army officer Capt Kapil Kundu, who was supposed to celebrate his 23rd birthday on 10th of Feb 2018, was a dedicated soldier and a fine officer. An alumnus of Divine Dell International school in Pataudi district, Capt Kapil Kundu was brilliant in academics during his student days. He loved cats and was also a poet penning many poems.

Indian Army gave a befitting reply and a fierce cross-border exchange of fire ensued. During this heavy exchange of fire Capt Kapil Kundu, who was on duty on one of the forward posts got seriously wounded along with three more soldiers of his unit. Capt Kapil Kundu and three other soldiers Hav Roshan Lal, Rifleman Subham Singh & Rifleman Ramavtar later succumbed to their injuries and were martyred. Capt Kapil Kundu was a committed soldier and a fine officer who laid down his life in the service of the nation.

Capt Kapil Kundu is survived by his mother Smt Sunita Kundu and sisters Sonia and Kajal.