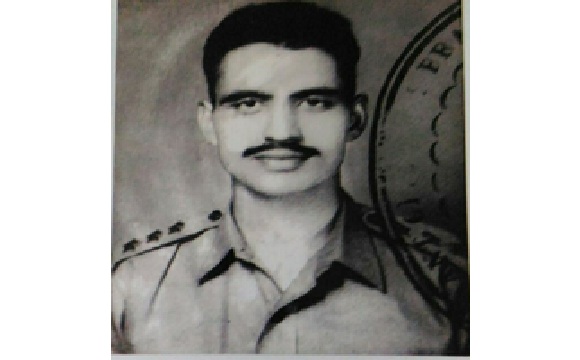 Capt JS Punia hailed from Bangothari Khurd village near Pilani in Jhunjhunu district of Rajasthan and was born on 03 Jul 1945. Son of  Shri Choudhary Hans Ram Punia and Smt Jamana Devi, he developed keen interest in sports and Armed Forces as well since his younger days. Following his dream, he got selected to join the army and eventually donned the uniform in the year 1969 at the age of 24 years. He was commissioned into 19 Raj Rif battalion of the Rajputana Rifles Regiment, an infantry Regiment known for its brave soldiers and numerous battle honours

After serving for few years, he got married to Ms Mewa and the couple had two sons Sukhvir Singh (Sukhvir Singh was three years old when his father got martyred) and and Ummed Singh (Born one month after his father's martyrdom). The elder son too joined the Army and served with the same battalion 19 Raj Rif like his father. Unfortunately he lost his life in a road accident in 1995 during a road accident.

During Dec 1971, Capt JS Punia's unit was deployed in the eastern sector as part of 73 Mountain Brigade. 73 Mtn Bde was functioning under the operational control of 57 Mountain Division under the overall command of 4 Corps. At that time, Capt Punia was serving as 2IC of ‘A’ Company of his battalion. Prior to the commencement of 1971 war, the Company was deployed on the apron of Agartala airfield to guard against any sneak commando raids by an enemy airborne force. With the commencement of the war on the night of 3/4 Dec 1971, the company of Capt Punia was tasked to capture Chandpur opposite to Agartala aerodrome before 1100 hrs on 4 Dec 1971. Despite the absence of detailed intelligence about the enemy's deployment, the company under the leadership of Capt Punia managed to successfully capture the given objective without suffering any casualty.

After capture of Chandpur, the company was ordered to exploit the capture and make further inroads into enemy defences. During the advance, Capt Punia and his troops noticed enemy defences based on a high embankment covered with mines, panjees and barbed wire. Capt Punia was then ordered to capture a portion of enemy defence with one strong platoon to enable rest of the company to capture complete enemy defence. These defences were based on anti-tank ditch covering approximate 3-4 Km South West-North West joining Titus river to stop the advance of Indian Army towards Akhaura. The mine covered ditch was 20 to 60 yards wide with 8 to 10 feet high perpendicular walls bristling with field fortifications. Capt Punia along with is platoon first secured a foothold on the home side of the ditch and then charged across to the far end. Despite stiff enemy opposition and heavy fire Capt Punia and his men kept assaulting the enemy and reached near the MMG bunkers.

Due to non-negotiable height of the ditch and incoming heavy enemy fire, it had become difficult to fire directly on the enemy. But Capt J S Punia kept motivating his platoon by shouting the Regimental war-cry ‘RAJA RAMCHANDRA KI JAI’ at the top of his voice. He asked a rifleman to lift him on his shoulders so that he could lob hand grenades into the enemy bunkers. Seeing this daring action of Capt Punia, the enemy directed all its fire towards him and many bullets pierced his abdomen and a burst of MMG hit his thighs. Despite being fatally wounded, he lobbed a grenade into an enemy bunker and silenced the MMG. He also got his men climbing on each other’s shoulders to lob grenades and subsequently destroyed many enemy bunkers. The enemy in fortified defences got panicky by this daring action of Capt Punia and his men and abandoned the position leaving behind large quantities of arms, ammunition and stores (approximate 3-4 ton load). Capt Punia thus succeeded in capturing the given objective but in the process got fatally wounded during the action. The rest of the company joined them during midnight 4-5 Dec 1971 and captured the enemy defences. Capt Punia was a gallant soldier and gritty officer, who led from the front and laid down his life in the line of his duty.