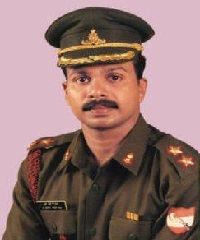 Captain Jerry Prem Raj VrC hailed from Venganoor, in Trivandrum District of Kerala. He was the son of Mr. Retna Raj ( worked in the Department of Technical Education, Kerala) and Mrs. Chella Thayee (worked in the Health Department of the government of Kerala). His brother Rejinald Pavithran is an IAF veteran.

During his first year degree, he joined Indian Air Force on 02 Feb 1990 before attaining the age of 18. In Indian Air Force he was trained as an instrument fitter and after two years of training, he was posted to Air Force base at Ambala. From Ambala, he was sent for maintenance conversion flight training of Jaguar aircraft at Gorakhpur. Meanwhile, he completed his degree from Kakatiya University in sociology and was selected as an officer in the Indian army.

After undergoing training in OTA Chennai, Capt Jerry was commissioned as an artillery officer in Indian army on 5th Sep 1997. He got posted to 158 Med Regt at Meerut after training and then attended the Young Officers’ course.

On the night of July 6, 1999, Capt Prem Raj’s battalion was tasked to assault Point 4875, at 15,000 feet, a craggy rock face, a vital key to clearing Mushkoh in Drass Sector (Jammu and Kashmir). While directing artillery fire, Capt Prem Raj got wounded by enemy sniper fire. Undeterred, he continued his mission and directed accurate barrages of artillery fire, which devastated the enemy fortifications and caused large casualties to the enemy.

However, during this exchange of fire, Capt Prem Raj was yet again hit by a volley of enemy machine gun fire. Mortally injured, he refused to be evacuated till the assault was complete. He succumbed later after the successful capture of the enemy post. He was posthumously awarded the Vir Chakra, the third highest gallantry award of India.

On the night of 6th/7th July 1999 during “Operation Vijay”, Captain R. Jerry Prem Raj was the Forward Observation Post Officer with 2 Naga tasked to launch an assault on Twin Bumps in area Gun Hill in Drass sub-sector. During the assault, Captain R. Jerry Prem Raj searched, sought and identified enemy positions and directed accurate artillery fire onto them with devastating effect.

In this endeavor, he was shot by enemy sniper fire. Undeterred, he continued to bring down effective fire on enemy positions. However he was again hit by a volley of enemy machine gun fire. Though severely wounded, he continued to direct accurate fire onto the enemy until he succumbed to his injuries. By then he had inflicted heavy casualties on the enemy that not only assisted in the capture of the objectives but also helped in minimizing casualties to own infantry.

Captain R. Jerry Prem Raj displayed bravery of a very high order and tremendous professional acumen with total disregard to his safety and made the supreme sacrifice.

Capt Jerry Prem Raj in the words of his elder brother Reginald Pavithran :

“Jerry was younger to me by three years. At 6 months of age he won healthy baby show in our village. He was very healthy at that time. He was having long hair. He was looking like a girl at that time. During his school days he was a very good cricketer. He was a fast bowler and an all rounder. In his captaincy their team won the cricket tournament in 10th standard. He was very good in studies. He studied in Malayalam medium but was very good in English. During his school days he was the student secretary of Indira Priyadarshini Science Centre at our village. Under his leadership this centre organised science exhibitions in the school. He was very God fearing also. He was active in Sunday schools also. He was a very good artist and was very good in pencil sketch. He was a very good cartoonist. From childhood he was fond of army. He appeared for NDA but could not clear. Then he tried to join navy as a sailor. But in medical he was rejected. Then he joined Air Force as an airman. But he was not satisfied with it. He was very brave. He was very adamant to become an army officer. He had only one aim. He tried very hard to accomplish his aim and finally achieved it. He was very competitive. Jerry and me together brought many trophies and prizes to our home in various competitions.

He was younger to me by three years,but we were like friends not brothers. Before taking an important decision he will have a consultation with me. He was happy to take my guidance before taking an important step. He was fond of Mohanlal films. He was adept in storytelling. After seeing a film he will explain the story in such a way that I will not have to see the film again. He was a lovable person. His love, affection and care for others was unparalleled . He was very social and jolly person. Once u got a chance to talk with him, I bet u will never forget him. He was such a fantastic guy”.

A heart touching poem by a Solider..   If I died in a war zone, Box me up n send me home,

Put my medals in my chest, N tell my mom i did my best,

N tell my dad not to bow, He will never get tension from me now,

Tell my bro study perfectly, Keys of my bike will be his permanently,

Tell my sis dont be upset, Her bro will not rise after this sunset,

Dont tell my friends they are hearties, N start 2 ask for parties,